Not to be confused with Lost in Time.
Book
Gallery

Lost in Time: A Medieval Adventure

SpongeBob and Patrick are enjoying a lovely feast at Medieval moments restaurant when they were chosen to fight in the royal joust. After a freak accident, SpongeBob and Patrick find themselves back in medieval times where they are mistaken for great knights and sent to rescue the princess from the evil, one-eyed lord's jellyfish dragon! 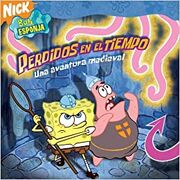 Retrieved from "https://spongebob.fandom.com/wiki/Lost_in_Time:_A_Medieval_Adventure?oldid=3527682"
Community content is available under CC-BY-SA unless otherwise noted.