Encyclopedia SpongeBobia
Register
Don't have an account?
Sign In
Advertisement
in: Episodes, Season 10 episodes, Articles in need of cleanup
English

View source
If you were looking for the article about the location, then see Lost and Found (location).

"Patrick's Coupon"
"Lost and Found" is a SpongeBob SquarePants episode from season 10. In this episode, Mr. Krabs sends SpongeBob in search of a missing toy, and SpongeBob finds himself lost in the lost-and-found.

The episode begins at the Krusty Krab, where a really creepy customer is waiting for his meal as Squidward looks at him with confusion. SpongeBob serves the customer his Krabby Patty as he starts to hear a kid loudly crying in the distance. Mr. Krabs explains to SpongeBob that the kid lost his teddy fish toy, and that his loud obnoxious crying is driving customers away. Mr. Krabs further explains that SpongeBob will have to venture into the Krusty Krab's Lost And Found, which is located underneath the kitchen, to retrieve it. SpongeBob heads into the Lost And Found as Mr. Krabs wishes SpongeBob luck on his journey. SpongeBob turns on a light switch, revealing that the lost and found is actually a massive maze of shelves containing thousands of assorted items and knick-knacks. SpongeBob becomes distracted while looking for the teddy fish, playing with a bunch of the lost and found's items, including sunglasses, whoopies cushions, and dancing with a rubber chicken. SpongeBob then notices a snow globe with what appears to be a miniature Bikini Bottom inside and shakes it, causing the entire town to have an earthquake and for SpongeBob to put the snow globe back in panic. Suddenly, out of nowhere, a cardboard box lands on SpongeBob's head, knocking him out as eerie laughter is heard in the distance.

Back at the Krusty Krab, Squidward complains to Mr. Krabs that the kid is still crying, much to his annoyance. Mr. Krabs fears that SpongeBob might be lost in the lost and found, and throws Squidward inside to go look for SpongeBob. Mr. Krabs warns Squidward to hurry, as the kids' constant crying very loud and throwing a huge tantrum is still driving customers away. Back with SpongeBob, he wakes up to find himself at the mercy of 4 old people. The woman of the group explains that they used to be children, who have been lost in the Krusty Krab's lost and found for over 60 years, and were never claimed. When SpongeBob questions how they survived down there for so long, she explains that they eat the gum and mints that people have left behind. The old children prepare a feast of gum and mints to honor SpongeBob's arrival, but SpongeBob notices the woman has the teddy fish he's been looking for, and tries to claim it. The woman refuses however, since she's grown attached to the teddy fish, but SpongeBob swipes it from her anyway, determined to return it to its rightful owner. The 4 old children give chase. We cut to Squidward, who is reluctantly searching the lost and found for SpongeBob, but ends up finding a box of kazoos instead. Squidward reminisces on how he used to love playing the kazoo when he was a child, but a quick flashback reveals that everyone hated it. Squidward then finds a box of his old clarinets, and realizes that they all used to be in a locker he once had. Suddenly, SpongeBob, not noticing Squidward, runs past him, knocking over his clarinets and stepping on them. Back at the Krusty Krab, Mr. Krabs accepts the fact that SpongeBob and Squidward might be lost forever, and tries to continue business as usual. However, the kids' crying is still driving out customers, prompting Mr. Krabs to give up hope and also start crying.

Back at the lost and found, a chase sequence ensues where SpongeBob and the 4 old children use various lost items to one-up each other. These include lost toys, lost toilets, and lost pets. The chase even escalates to a point where SpongeBob is being chased through other lost areas, including lost mines and a "lost world." Back with Squidward, he sees a hatch on the ceiling and assumes it to be the emergency exit. In actuality, it's the Krusty Krab grease trap, which ends up flooding the lost and found. SpongeBob finally gets cornered at a series of "lost dead ends," where the old children have SpongeBob surrounded. They stop their fight however when they notice the grease flooding the lost and found. SpongeBob gets an idea on how to escape, and whistles. Cutting back to the Krusty Krab, we see Mr. Krabs and the child are still crying. SpongeBob finally returns from the lost and found by using one of the dinosaurs from the "lost world", as well as bringing the old children with him. 4 more elderly people arrive in the Krusty Krab kitchen, revealing themselves to be the children's parents. They explain that they've been coming to the Krusty Krab weekly for years in hopes as finding their children. As everyone reunites, SpongeBob gives the child his teddy fish back, but he is more interested in the dinosaur SpongeBob brought back. SpongeBob and Mr. Krabs question where Squidward is, and it's revealed that he's still lost in the Lost And Found, as the episode ends.

The episode name was confirmed in a tweet by Vincent Waller on November 7, 2016.[2]

The German iTunes release has shown the production card of this episode, which revealed the date when the episode was finished to be March 9, 2017. 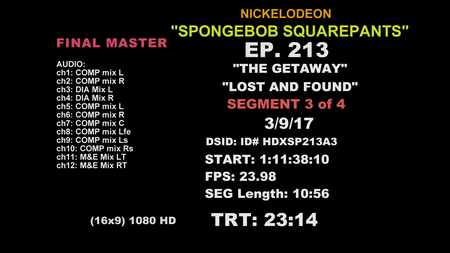