Lori Alan was born as Lori Alan Denniberg in Potomac, Maryland. Her mother was a Southern Baptist and her father was Jewish. Both of her parents were performers and supported her choice to become an actress. She started acting at the age of five, and made her television debut in a commercial for Shakey's Pizza. Her theater debut was as Annie's youngest sister in a local production of Annie Get Your Gun.

Alan has spoken out against animal cruelty and is the co-founder of the United States section of the Global Campaign NoToDogMeat. This organization raises awareness for dogs and cats being slaughtered and used as food. She is also on the board of Pickel Pants Rescue, an animal rescue center in Los Angeles.

Alan is known especially for her vocal work, which currently spans over three decades. She gets the authentic personality of her characters by improvising. She voices Pearl Krabs the Whale on SpongeBob SquarePants, Sue Richards (The Invisible Woman) on Marvel Comics' The Fantastic Four, and Diane Simmons on Family Guy. Alan has done voices in feature films: Monsters University, Toy Story 3, Despicable Me 2, Wall-E, and Finding Dory. She has also voiced roles for Henry Hugglemonster, Cow and Chicken, Animaniacs, and Futurama. She also has voiced roles in some video games such as The Boss on Metal Gear Solid 3: Snake Eater, and some minor roles in Marvel: Ultimate Alliance 2 and Kinect Rush: A Disney-Pixar Adventure. 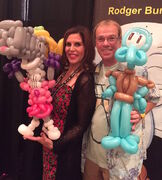 Lori Alan with the other Gal Pals voice actors

Lori Alan at the premiere of Toy Story 4