Play at www.nick.co.uk
Live From Bikini Bottom is a SpongeBob SquarePants online game. It is based on "Pressure."

One of the objects is a bottle with a piece of paper inside and if the player clicks on the bottle, it will show a list of fun things to do in the game. There is a tropical island tree that the player can click on to make coconuts fall from. Sometimes in the game, random objects fall onto the island. The player can click on an object that fell onto the island and drag it to a character to let them interact with it.

The game never ends until the player chooses to quit the game. 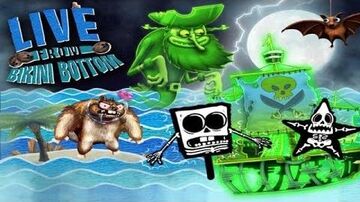