"Bumper to Bumper"
"Little Yellow Book" is a SpongeBob SquarePants episode from season 9. In this episode, Squidward finds SpongeBob's diary and reads it out loud to everyone at the Krusty Krab, and they make fun of him for what they find out.

At the Krusty Krab one day, business is slow. As a result, Squidward decides to rest. Before he even gets a chance to do so, a lot of customers come in and start surrounding him. Squidward freaks out when he realizes SpongeBob is not cooking. Squidward then finds SpongeBob in a barrel, encouraging him to get back to work. SpongeBob starts making food and serves everybody while Squidward finds a book in the barrel. Then, SpongeBob snatches it away from him and puts it in between the two frying baskets.

A few minutes later, SpongeBob takes a break and Squidward finds the book in the barrel again. Now that he finds out the book was a diary, Squidward reads it to everyone at the Krusty Krab, revealing sensitive information about SpongeBob.

Later, SpongeBob finds out Squidward has been reading his diary and becomes sad and humiliated. As a result, he runs out of the Krusty Krab crying.

Everyone now realizes that this was SpongeBob's diary, so they get angry and disgusted by Squidward's actions, and leave the restaurant in anger. Mr. Krabs angrily scolds Squidward for his actions and demands that he apologize, but Squidward is too callous to feel remorse over his harassment toward SpongeBob. Later on, Squidward finds a newspaper that publicizes his recent behavior, but is unaffected by the notoriety. Then he goes to a taxi, but the taxi driver just drives away because of what Squidward did to SpongeBob. As Squidward walks away, he has been ridiculed and insulted by Bikini Bottom citizens for reading SpongeBob's diary. Much later, he goes to his house, only to find out that his loan was taken away due to reading SpongeBob's diary. It appears that Squidward has got what he deserves for his harassment towards SpongeBob.

With his house privileges now revoked and sees that his luck has finally run out, Squidward sleeps on a bench. However, two police officers arrive and tell him that he cannot sleep in the bench, until they recognize him and lock him in the stocks. Patrick arrives and throws tomatoes at him. Patrick furiously berates Squidward for reading his best friend's diary and leaves in anger, before throwing another tomato away at Squidward in revenge. Then SpongeBob comes and Squidward subsequently apologizes to SpongeBob and he learns that because everyone was amused by it, it got published and became a best seller. SpongeBob also tells him that he only read his work diary, and not his secret personal diary, which - in his opinion- would have been more embarrassing.

This inspires Squidward to read SpongeBob's diary once again, and, because of this, SpongeBob cries in humiliation and runs away. The episode ends with tomatoes being thrown at Squidward by the disgusted, hypocritical and angry crowd, with Squidward laughing as he reads SpongeBob's diary and not caring about his comeuppance, deeming that it was to be worth it. 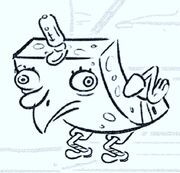 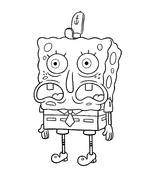