A complete list of renamed episodes in SpongeBob SquarePants. Throughout the series, there have been some instances of episode titles getting renamed because either the creators didn't like the original title or the original title was deemed inappropriate.

Note: Episodes with alternate names on the TV guide listings do not count. For an episode list with the official episode titles, see List of episodes. 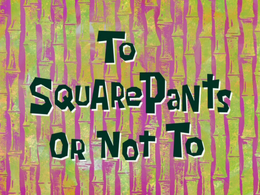 Retrieved from "https://spongebob.fandom.com/wiki/List_of_renamed_episodes?oldid=2537648"
Community content is available under CC-BY-SA unless otherwise noted.