Encyclopedia SpongeBobia
Register
Don't have an account?
Sign In
Advertisement
in: Articles in need of cleanup, Lists, Locations

This article lists the places in the city of Bikini Bottom consisting of various landmarks, residential areas, commercial areas, industries, and government establishments in SpongeBob SquarePants. 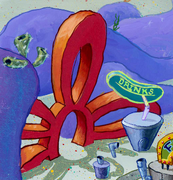 The Flower Arch (only seen in early episodes).

Mt. Climb-Up and Fall Off

Bikini Bottom in Season 2 and 3.

Bikini Bottom in the snow.

Bikini Bottom in the Daytime. From The SpongeBob SquarePants Movie

Bikini Bottom in the Daytime. From The SpongeBob Movie: Sponge Out of Water

Bikini Bottom in the Daytime. From The SpongeBob Movie: Sponge on the Run

Some of the roadways in Bikini Bottom include:

Businesses and establishments of Bikini Bottom include: 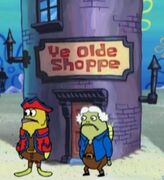 For certain or unknown reasons, some places in Bikini Bottom are no longer standing.

From Other Time Periods

Advanced prehistoric Bikini Bottom appeared in "Ugh." The water is very murky. A forested area features tall grass and trees with vines. Only three known structures exist: SpongeGar's Ancient Pineapple (contains a bed on the floor, with a rock on a bone shelf as an alarm clock. A cave painting of SpongeGar jellyfishing is on the wall); Squog's Ancient Easter Island Head (A key is required to get inside; it has two floors, the main floor has a rock with two thick sticks (one harder than the other) and the other floor is the art gallery where Squog painted a little bit); Patar's Ancient Rock.

In 41st Century Bikini Bottom, everything is painted with chrome as seen in "SB-129." The future Krusty Krab was seen, which contains a normal kitchen, only everything is chrome. A can opener room (down hall and to the left) and a Time Machine (down hall and to the right) are featured as well. The Time Machine is actually pink and green with a Tiffany-style light fixture, and has a lever labeled "past" and "future," with a key and three buttons to the right.

This dimension features multi-colored squares, in different places which disappear when lifted, and it comes with a blank white background. Mysterious voices lurk around and copy words that are said (while spelling them out using goofy fonts), and it is hard to get out as running around here will take you back to where you started, as inspired by The Matrix. However, the time machine is always right under where you stand (revealed in "SB-129"). The only known way to access this place is to destroy the time-switch activator in a time machine. Squidward is the only known character to have gone to this dimension.

An opposite version of Bikini Bottom; the only known inhabitants are parallel versions of SpongeBob and Patrick. Parallel SpongeBob has been seen in several episodes, including "Wet Painters" and "Something Smells," while Parallel Patrick has only been seen in "Rule of Dumb" and "Roller Cowards." There might be a Parallel Squidward, as shown in "Squidward in Clarinetland," however, he might just have been a fantasy created by Squidward.