Start a Wiki
This article is a complete list of deleted or edited scenes from SpongeBob SquarePants episodes. A deleted scene is any scene that has been cut out of either an episode from the storyboard version, cut out in International airings, or has been cut out from the episode in airing after the original airing. 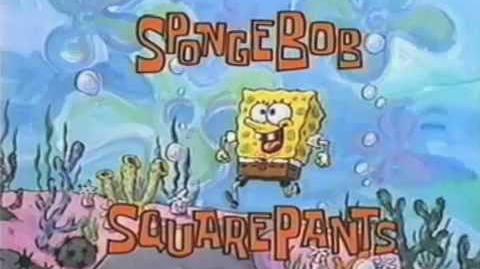 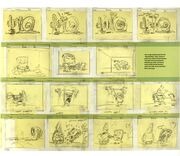 Storyboard page from Not Just Cartoons: Nicktoons!
Add a photo to this gallery 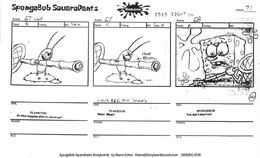 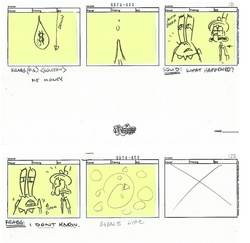 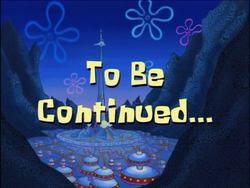 There is a deleted scene included on the DVD and Blu-ray that can be found in the Animatics feature. The deleted scene shows SpongeBob and Patrick meeting Sandy on land. It had probably been cut because of Patrick vomiting many times. In the same deleted scene, Shell City is actually a city and is where Sandy constantly gets pursued all over the place by squirrel exterminators in black suits. She also mentions that there are buses that arrive here and Bikini Bottom. Also, during SpongeBob's awakening in The Goofy Goober Party Boat, he asks for a "double fudge spinny." This line was rejected from the film, but was still used in the Ice Cream Dreams book which is loosely based on the ice cream sequence in the movie. There is also a deleted scene where Mr. Krabs appears in SpongeBob's room with the "MANAGER" hat. This was cut due to save time, or that the team thought the ending was a bit dull.

However, the deleted scene of meeting Sandy on the surface was later recycled into the 2nd movie when SpongeBob and friends are surprised by Sandy's superhero ability of being a giant real life squirrel named "The Rodent." It was cut to either avoid confusion or surprise everyone in the 2nd movie that this deleted character would end up in the second movie. In the first teaser trailer Gary is shown enjoying taking a bath with SpongeBob as the latter plays with his water toys. It was cut to save time. A picture of SpongeBob can be seen here (its deleted)

Some scenes that were shown in the trailers and TV spots that did not end up in the final film include:

It's a Wonderful Sponge Deleted Scene 4

Airings of episodes in other countries occasionally cut out scenes, sometimes due to different cultural standards or simple editing mistakes.

Sometimes, characters are credited despite not being in the episode. This may mean that they were intended to be in the episode, but their scenes were cut.

Start a Discussion Discussions about List of deleted scenes