The producer of the superhero show The Adventures of Mermaid Man and Barnacle Boy {Gill Hammerstein) is filming a special episode in Bikini Bottom and using the locals as actors. All of your favorites are desperate to impress the talent scouts who have created a series of action-packed challenges to test the wannabe stars. Join SpongeBob and his friends as you compete against your friends for 9 different roles, including the coveted supervillain role, the Sneaky Hermit.

The following is a list of mini-games (referred to as auditions in the game) available in the game:

The game has a variety of locations and hosts, who judge the players for a specific role.

Bonuses can be unlocked by having save files for Barnyard, Nicktoons Unite!, and Tak: The Great Juju Challenge on a memory card.

When an episode of the popular series The New Adventures of Mermaid Man and Barnacle Boy is supposed to be filmed in Bikini Bottom and nobody shows up to audition except for one yellow sponge, the show is put on hold. With the show in danger of being canceled, the show's producer, Gill Hammerstein, makes it SpongeBob's job to collect props and find actors in order for the show to go on. 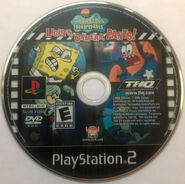 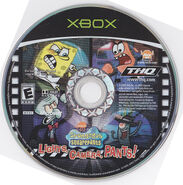 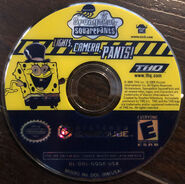 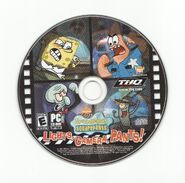 PC disc.
Add a photo to this gallery

Generally, as seen by gaming reviews and by the overall opinion of fans, Lights, Camera, Pants! was viewed as one of the better SpongeBob-based video games made. 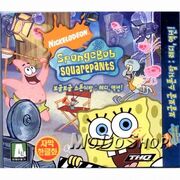 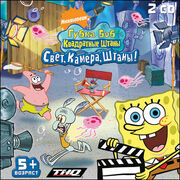 Retrieved from "https://spongebob.fandom.com/wiki/Lights,_Camera,_Pants!?oldid=2414063"
Community content is available under CC-BY-SA unless otherwise noted.