"Le Big Switch" is a SpongeBob SquarePants episode from season five. In this episode, Mr. Krabs enters SpongeBob in a chef exchange program.

Mr. Krabs, in an effort to increase profits and decrease costs, puts SpongeBob into a chef exchange program. SpongeBob goes to work for a restaurant named Fancy!, while the head chef, Le Schnook, works for the Krusty Krab.

Things do not start out well for SpongeBob, as the owner Mr. Crustacean demands that he cook quality gourmet. Unfortunately, SpongeBob is quite literally incapable of cooking anything but Krabby Patties, to the degree where he cannot even fry an egg without it instantly transforming into a patty. Mr. Crustacean continues to yell at him until he actually tastes a patty. Realizing how good it tastes, he begins to sell them to which all the rich clienteles enjoy. Eventually, SpongeBob's time there is up and he is about to return to the Krusty Krab. Unfortunately, that is not what Mr. Crustacean or the customers want. They attach themselves to his ankles and beg him not to go. SpongeBob has to drag them out of the restaurant. 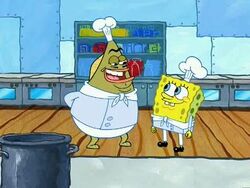 Meanwhile, things are not going well at the Krusty Krab. Le Schnook is none too pleased by Mr. Krabs' cheap attempts of setting up a lavish establishment. He refuses to cook unless his demands for expensive furniture, ingredients, and real silverware are met. As a result, the Krusty Krab goes completely bankrupt and out of business.

He sells the decorations, his home possessions, his office desk and chair, along with Squidward. Pearl even calls him, thinking that the house has been infiltrated by burglars; Mr. Krabs assures her that they are just repo men. Before returning to Fancy!, Le Schnook gives Mr. Krabs a long bill for his services. Mr. Krabs breaks down crying, realizing what giving away SpongeBob cost him. It is at this time that SpongeBob returns with a massive chain of customers still attached to his ankles.

The episode wraps up with the Krusty Krab opening again. Old, new and rich clientele happily eat Krabby Patties off the floor like pigs. Squidward asks if they should even be eating on the floor. Mr. Krabs responds that the only thing they need is food and love.

Retrieved from "https://spongebob.fandom.com/wiki/Le_Big_Switch?oldid=3029244"
Community content is available under CC-BY-SA unless otherwise noted.