"The Fish Bowl"
"Larry's Gym" is a SpongeBob SquarePants episode from Season 9. In this episode, Larry the Lobster opens a new gym.

The episode starts out with Larry the Lobster announcing the opening of his gym in front of a crowd. Larry also says that he is opening his gym to everyone in Bikini Bottom after seeing most are out of shape but at the price of a lifetime membership much to the displeasure of the crowd. However, Larry says that for only today, everything is free, much to the excitement of the crowd, who rush inside of the gym. Customers sign in membership forms and Mr. Krabs suddenly appears upon hearing the word "free" from Larry, who then rushes inside of the gym as well. Larry agrees to help anyone but sees SpongeBob struggling to open a door whom he tells it is automatic. SpongeBob is not even heavy enough for the door to open and Larry assists SpongeBob inside. Larry then spots Mr. Krabs trying to leave with an exercise bike and reminds him the first visit is free. Mr. Krabs heads back inside mistakenly hearing that it will be forever free if he does not leave. Larry is eager to work out, but must file out all of the membership forms first.

Inside, Larry is seen going through the paperwork and is worn out until SpongeBob walks up to him showing his cramps. Larry advises SpongeBob to always stay hydrated and gives him a bottle of water, which SpongeBob drinks and his cramps heal. Larry then agrees to personally train SpongeBob, but only if he signs a lifetime membership, which he does (with some difficulty). Larry walks SpongeBob over to the exercise equipment and SpongeBob (after seeing Mr. Krabs barely lifting a large set of weights) starts to doubt himself, saying he cannot lift weights. Larry, upon hearing this, puts cotton balls on a cotton swab to see if SpongeBob can lift it, but SpongeBob is not able to lift it. SpongeBob continues to stay hydrated while Larry walks SpongeBob over to where he leads his exercise class the next day. Larry then decides to show SpongeBob some crunches, but SpongeBob simply laughs as he doing this. Larry, who is in the middle of doing paperwork, is annoyed by Mr. Krabs flossing his towel in front of him saying "free towels." Mr. Krabs thanks Larry for the free membership and then leaves, but not before poking fun at Larry's potbelly as Larry is shown to be out of shape. Larry then enters the exercise room to check up on SpongeBob, but is shocked by something.

The next day, at the Krusty Krab, the customers can be seen angry wanting their food, and in the kitchen, SpongeBob is seen very huge and muscular and is struggling with the Krabby Patties. Squidward is also surprised by SpongeBob's appearance and SpongeBob decides to leave back to the gym. SpongeBob arrives at the gym to see Larry completely out of shape. Larry comments saying he has been doing so much paperwork that he does not have any time to work out. Larry soon becomes depressed over his appearance, with Mr. Krabs drinking his tears, thinking it is "free soup." Later, SpongeBob is seen teaching Larry's exercise class, demonstrating exercise procedures. Larry then walks over back to his desk barely even able to lift anything, and SpongeBob eventually confronts him. Larry then decides to let SpongeBob run the gym, but SpongeBob is sad that he is too big and strong to work the grill at the Krusty Krab. Larry and SpongeBob then share a "bro hug" and, suddenly, water pours out of SpongeBob and he returns to normal. Larry concludes that SpongeBob was overhydrated and that those were "water muscles." SpongeBob says that Larry's hug was strong enough to squeeze the water out of him. Larry then shares a laugh with SpongeBob while doing crutches and returns to normal. Back at the Krusty Krab later that evening, SpongeBob is excited to be working the grill again and Squidward comments that the day was even better as Mr. Krabs never showed up. At Larry's gym, Larry opens the steam room to find Mr. Krabs cooked up. Mr. Krabs then asks Larry if he could rub butter on him, as the episode ends.

Adam Paloian, storyboard artist shared on his tumblr page there was a scene on this episode that got censored. "Here is a deleted/changed scene that didn't make it past the censors. In this scene, Larry originally said, "The only thing worse than donuts is ground glass!" as he forcefully broke a glass cup in a fish incidental's mouth... Hmm, I guess now it kinda makes sense why S&P didn't approve of this one."

The scene sequence that got censored. 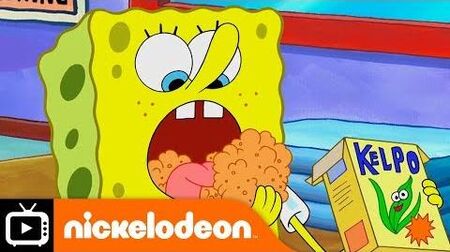