Start a Wiki
If you were looking for the article about the place, then see Krusty Towers (building).

"Krusty Towers" is a SpongeBob SquarePants episode from season four. In this episode, Mr. Krabs turns the Krusty Krab into a hotel.

Both Squidward and SpongeBob are walking to work, and SpongeBob tells a story about overcooking the fries (although it turns out he didn't), much to Squidward's annoyance. In the meantime, Squidward realizes the Krusty Krab has dramatically changed. Mr. Krabs has turned the restaurant into a hotel and renamed it the Krusty Towers, with the original building now on top of a large tower. Mr. Krabs explains that while he was on vacation, he was shocked by his outrageously high hotel bills, tallying up to $345.00 (mostly shocked at a twenty-five dollar charge for a hamburger he had), and realized how much money hotels can make. He says that the employees there lived by a code: "We shall never deny a guest even the most ridiculous request," which was on a gold plaque above a fireplace in the hotel he stayed at. He put that one for the Krusty Towers.

A customer enters to buy a Double Krabby Patty with cheese, then leaves when Mr. Krabs tells him that he must book a hotel room to order room service to eat their food. Patrick soon arrives and becomes the hotel's first actual guest. After signing the register, which he believed was a test, Squidward carries Patrick's bags (which instantly appeared and were full of rocks for unknown reasons), and he tries to take the guest elevator, but Mr. Krabs stops him and explains that he must take the "employee elevator," which is in fact, a staircase. Patrick then requests Squidward several more times for ridiculous reasons. Whenever Squidward got to the bottom of the hotel, Mr. Krabs told him to go back up to do something that Patrick wants. After being ordered to give Patrick a "bubble bath," Squidward states he's had enough. He angrily says to a protest Mr. Krabs, “I quit!”

He walks out the door and immediately comes back as a guest, instead of an employee. He decides to take advantage of Mr. Krabs' rules by demanding a room on the top floor and that Mr. Krabs to carry him to get there, which he gets by paying him and using the plaque. Then he ordered a Krabby Patty with cheese, nose hair, and toenail clippings, and forced Mr. Krabs to eat for humor. Also, Patrick had all the cheese all over his room (because he requested his room with cheese) which was supposed to be on that Krabby Patty. Squidward then wanted his cookies like the ones his mother makes which Mr. Krabs resentfully had to get, with SpongeBob coming with him. Then, he wanted Mr. Krabs and SpongeBob to repaint his room and change his furniture only to get it back to its original state. He then wanted an indoor pool. After getting the indoor pool, Patrick jumps in, and the force causes the hotel to collapse, leaving only the original Krusty Krab standing.

Patrick, SpongeBob, Squidward and Mr. Krabs luckily survive, but end up in the hospital with massive injuries. When Mr. Krabs sees the hospital fee ($15,000), he scraps the idea of a hotel and tells Squidward, SpongeBob, and Patrick that they are going to medical school, much to Squidward's dismay and SpongeBob and Patrick's delight. 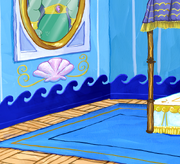