This hat is given to anyone who is a part of the Krusty Krew, most notably SpongeBob SquarePants and Squidward Tentacles. The hat is fully white except for a blue anchor in the center, a black ring at the bottom, and a blue curved peak. The outline of the white portion is usually in red.

The manager-employee hat has almost no difference from the regular employee hat, except it is slightly taller, and has the word "Manager" written on it in black, instead of having the blue anchor on it.

A poorly drawn version of the Krusty Krab employee hat appears in the online game Hero's Choice and the episode "Doodle Dimension."

The Krusty Krab employee hat is seen in many SpongeBob SquarePants episodes that primarily take place at the Krusty Krab, as well as the three films.

SpongeBob cherishes his hat and sees it as a symbol of his beloved job. He believes a good employee should always keep a block of lead in their hat, as revealed in "Employee of the Month."

Most of the time, the Krusty Krab hats stay on top of employees' heads even when they should not logically be able to. However, forces such as the wind and water are sometimes capable of pushing the hat off.

Each of the ten main characters has worn a Krusty Krab hat at least once in the series.

In SpongeBoy Ahoy!, the original series concept by Stephen Hillenburg, the hat had a "C" on it instead of an anchor. This is because the name of the restaurant was the "Crusty Crab."

In the GBA version of Battle for Bikini Bottom, the robot SpongeBot SteelPants wears a metal employee hat. It has three bolts on it, a metallic shine, and a bright blue anchor.

In the credits of The SpongeBob SquarePants Movie, a similar looking hat is worn by SpongeBob after becoming the manager of the Krusty Krab 2. This hat is larger than the standard employee hat, and in place of the anchor is the word "manager" in capital letters, going vertically.

The video game of the movie's version of the hat is red with yellow letters, but it is otherwise identical to the one in the movie.

There is a similar hat for Weenie Hut employees, which uses a hot dog as the main part of the hat. It has the same shape as the Krusty Krab hat, including the curved peak at the bottom.

In "Bubbletown," SpongeBob wears a bubble employee hat for the Bubbly Krab. It is transparent with purple and green hues on it. There is no anchor symbol or ring on it. It comes with a bubble spatula. 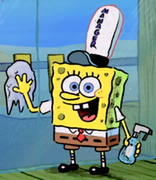 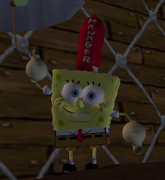