watch 01:48
'SpongeBob SquarePants' Recap: Krusty Kleaners
Do you like this video?

"Patnocchio"
"Krusty Kleaners" is a SpongeBob SquarePants episode from Season 11. In this episode, after spilling a milkshake during a delivery, SpongeBob vows to return and clean the entire building.

The episode starts with SpongeBob delivery a Krabby Patty meal to the boss at an office. However, he accidentally drops the meal and makes a mess. Despite the boss telling him it's fine, SpongeBob vows to clean the mess at night.

SpongeBob brings Patrick along to help, and the two start cleaning the office, unaware that a trash bot is also cleaning the office. After accidentally toppling all the cubicles, the two put them back up, but accidentally get themselves lost within it. Eventually they meet the trash bot, who tries to put Patrick inside of it as he ate a candy wrapper.

The machines start attacking the two and the walls of the office start falling apart. However, when SpongeBob and Patrick realize the company makes tanks, they utilize one of their tanks to defeat all the machines. Eventually the trash bot surrenders, and the episode ends with SpongeBob and Patrick leaving the office in a wrecked state, as the episode ends. 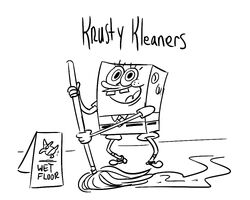 Retrieved from "https://spongebob.fandom.com/wiki/Krusty_Kleaners?oldid=3465548"
Community content is available under CC-BY-SA unless otherwise noted.