View source
If you were looking for the article about the business, then see Krusty Katering (business).

"SpongeBob's Place"
"Krusty Katering" is a SpongeBob SquarePants episode from season 10. In this episode, Mr. Krabs and his crew cater a fancy party, but they might be out of their depth with their new wealthy customers.

In the beginning of the episode, Mr. Krabs, SpongeBob, Patrick, and Squidward start to cater to Billy's birthday party for kids. Patrick is the clown and tries to make a balloon animal for the kids. It turns out to be a giant ball of tied-up balloons. Patrick tells a kid that it is a rock, and the child flies away with the balloon. Mr. Krabs tells Squidward to go give the kids their Krabby Patties, which scares Squidward because of the many germs that the kids have. One of the children sneezes on the patties, and Squidward is disgusted by this, especially when the other children eat the patties, causing him to throw up.

SpongeBob is seen as a bouncy house, while the kids hit a Plankton piñata. The birthday kid intentionally hits Mr. Krabs with the bat, instead of the piñata, causing money to fall out. Mr. Krabs angrily asks if he looks like a piñata, and the kid confirms this and leads the other children in a charge, causing Mr. Krabs to run. A child wearing spiked shoes appears, causing SpongeBob to tell him to take them off, but the child ignores this, making him burst.

The Krusty Krew realizes the kids are too wild, so Mr. Krabs throws the birthday kid as his crew makes a break for it. As the four run away, they cross paths with Ms. Mildred, a wealthy woman who asks them if they are high-class caterers she hired for a party. Mr. Krabs, seizing the opportunity to make money, lies that they are and uses Squidward's ink to make them fancy tuxedos. Mildred pays them with a large check, and when SpongeBob questions Mr. Krabs' motive, the latter silences his employees by threatening to return to the chaotic birthday party. He then has them prepare for the party.

The crew is mesmerized by the fancy sights and people as Squidward remarks that the high class would not believe their food is appetizing. Mr. Krabs agrees, and sends SpongeBob out to fancy the food. Krabs then looks around to see what people they are serving just as the birthday child appears in his clothes again, demanding his cake. Mr. Krabs then gets rid of the kid again when SpongeBob appears with Patties with gems embedded in them. Mr. Krabs questions this and the fry cook reveals he found a chest of gems to fancy the food, causing Mr. Krabs to admonish him for his actions of stealing as SpongeBob apologizes and tells him where he found them.

Patrick serves the patties to the people, but after eating one of them himself, he goes on a wild streak and starts eating the patties reserved for the guests. Squidward spots a band performing for the party and, after stealing the clarinet from one of the members, he decides to join them. However, his terrible playing causes the other members to run away and, oblivious to his lack of talent, he pursues them.

Meanwhile, Mr. Krabs tries to return the gems SpongeBob stole as the birthday child appears once more and threatens to light a series of fireworks if he is not given his cake. Krabs takes away the fireworks and reprimands the child for his dangerous actions as the child realizes his actions and then affectionately hugs him. However, Ms. Mildred calls Mr. Krabs, who throws the birthday kid down a laundry chute, and informs him of Patrick's actions. He promises to look into it after completing his original assignment.

SpongeBob scolds Patrick for his crazy and foolish behavior and tries to stop him from eating the food, causing a chunk of it to fly into Squidward's clarinet. After he blows it out, the chunk hits a guest, resulting in a food fight between them. Mr. Krabs finally arrives at the room SpongeBob got the gems from and finds the birthday kid hopping on the large waterbed. He tries to stop him, but his pointy feet cause the bed to burst, leading to a large flood.

During the food fight, Ms. Mildred tries to calm her guests, but is caught up in it herself. Mr. Krabs runs from the large rushing of water as Ms. Mildred chases him for his actions, but she is swept away by the flood along with SpongeBob and the guests. Mr. Krabs trips on a chunk of the patty, which launches him in the air a chandelier and ignites the fireworks he took from the birthday kid. Mr. Krabs is shot out of the mansion as Squidward and Patrick flee behind him, and the flood follows them.

The birthday kid is shown surfing on Mr. Krabs' check just as he is hit with his birthday cake while Krabs is upset about his check's location and Ms. Mildred complains about her party being ruined. SpongeBob is shown as a bouncy house again and laughing at the events while the kid with the balloon "rock" screams as he is floating around the scene, as the episode ends.

This storyboard reveals a lot of incidental model numbers. 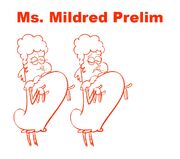 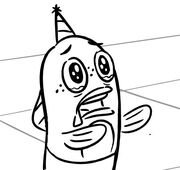 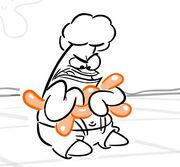