If you were looking for the article about the food, then see Krusty Dog.

"The Wreck of the Mauna Loa"

"The Wreck of the Mauna Loa"
"Krusty Dogs" is a SpongeBob SquarePants episode from Season 7. In this episode, SpongeBob creates a hot dog from Krabby Patty meat, but this leads to Mr. Krabs removing Krabby Patties from the menu.

SpongeBob soon teams up with Squidward to get rid of the Krusty Dogs and bring back the Krabby Patties. Squidward pretends that he is suffering abdominal pain due to the Krusty Dog and SpongeBob gives a speech trying to persuade the customers to go back to eating Krabby Patties, but neither one of these attempts work. In a last-ditch attempt to abolish the Krusty Dogs, SpongeBob stuffs a balloon inside one and quickly pumps air into it after he serves it to a customer. The Krusty Dog explodes in the customer's face and everyone panics, fleeing the scene.

Mr. Krabs decides to bring the Krabby Patties back and Squidward is made to stand outside the restaurant advertising the patties, only to be kicked by a woman who thinks he did not receive good enough education.

The Following Day...
Add a photo to this gallery 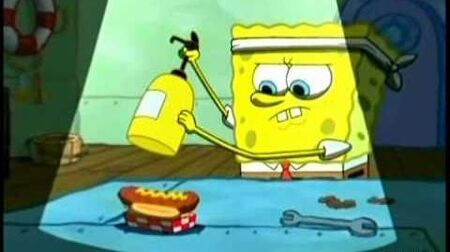 Retrieved from "https://spongebob.fandom.com/wiki/Krusty_Dogs?oldid=3525168"
Community content is available under CC-BY-SA unless otherwise noted.