"Rock-a-Bye Bivalve"
"Krab Borg" is a SpongeBob SquarePants episode from season 3. In this episode, SpongeBob and Squidward think Mr. Krabs is a robot.

One night, SpongeBob and Gary watch a scary movie called Night of the Robot, which is about robots that take over the world, and it shows a live-action robot chasing a live-action human. Gary tells SpongeBob that he should not watch it, as scary movies freak him out, but SpongeBob denies this. He is then shown laying in bed shaking in fear, wondering if everyone he knows is a robot. After asking Gary if he is a robot, SpongeBob decides he has nothing to worry about and tries to get some sleep. Unfortunately, he has a nightmare about the same robot from the movie chasing him, and the next day at the Krusty Krab, he has become very paranoid and believes that robots are "everywhere" (one turning out to be a trolley with cleaning equipment and a sack of Sea Potatoes, and another a red light which was actually the warning light for the deep fryer).

Meanwhile, Mr. Krabs is in his office, listening to Bikini Bottom's number one hit song on his portable radio, titled "Electric Zoo." Mr. Krabs likes the song and hums to it. SpongeBob later walks past Mr. Krabs' office and overhears him saying he feels "completely recharged." He then witnesses Mr. Krabs talking to his radio, talking in a "robot" language over the phone, and doing a bizarre robot-like dance to the song.

SpongeBob then tests Mr. Krabs' emotions by telling him that Squidward's father never hugged him to see if he will cry. Mr. Krabs says that although it is a little sad, Squidward can hug himself during his break. This further worries SpongeBob, but Squidward says that this is ridiculous and that his father loved him very much. This reminds SpongeBob of the third and final test: the love test. SpongeBob tells Mr. Krabs that Squidward loves him, but he simply tells him to get back to work. Back in his office, Mr. Krabs' radio breaks and he decides to give the batteries to Pearl for her Christmas present. A timer rings, and he grabs a pair of tongs and removes his hard-boiled egg from a pot of boiling water, ready to eat it. But just when Mr. Krabs is about to put some salt on the egg, he is startled when SpongeBob calls out his name the fourth time, and he accidentally tosses the full salt shaker into his eyes, and he screams in pain.

Squidward then asks SpongeBob what the robots in the movie looked like. SpongeBob says that they had red eyes, metal pinchers for hands, and ran on batteries. Squidward then asks if Mr. Krabs looks anything like that, and this is (seemingly) answered when Mr. Krabs barges out of his office screaming in pain with glowing bloodshot eyes, the tongs he used to hold the egg, and the radio batteries in his pocket. As Mr. Krabs runs to the bathroom, Squidward finally believes SpongeBob, and tells him to call the Navy, but due to their automated phone service, SpongeBob thinks that the robots have taken over the Navy. Squidward then announces over the microphone that robots are taking over the world, causing all the customers to flee the Krusty Krab.

Mr. Krabs then emerges from the bathroom, relieved that his eyes are not hurting anymore, and goes back to his office, not noticing that the Krusty Krab is now empty. Squidward then wonders how they will find out what happened to the "real" Mr. Krabs, and SpongeBob says that the main character in the movie teamed up with a buddy and they got the poop on, or collected information from, the robot. After reading a book on how to torture, the two go into Mr. Krabs' office and tie him up, demanding to know where the "real" Mr. Krabs is. After getting no answers and Mr. Krabs insisting that he is the real Mr. Krabs, SpongeBob and Squidward decide to interrogate his machines, which include a blender, a toaster, a food processor, and a coffee maker.

These, of course, do not give any answers either, so Squidward destroys them with a baseball bat. This greatly upsets Mr. Krabs, as he paid good money for them, and he finally breaks down crying when SpongeBob brings in his cash register. He also mentions laughing with it and loving it, revealing that he is not a robot. Squidward then asks SpongeBob how the movie ended. SpongeBob, while thinking the ending was great, remembers that the ending revealed the robot invasion was just in the characters' imagination and that there were no robots after all.

Realizing his mistake, SpongeBob declares that it is time to feed Gary and runs off, leaving Squidward to take the heat from Mr. Krabs. As a nervous Squidward grabs a broom and begins sweeping, a furious Mr. Krabs growls and screams "Squidward!" which ends the episode there. 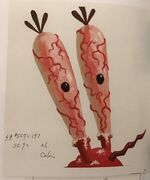