View source
This is the page about the season 12 episode. For other uses, see Plankton (disambiguation).

"Plankton's Old Chum"
"King Plankton" is a SpongeBob SquarePants episode from Season 12. In this episode, Plankton practices ruling the world by shrinking himself down and declaring himself king of SpongeBob's aquarium.

In the beginning of the episode, SpongeBob brings his aquarium of sea chimps to the Chum Bucket while he is at work, as he thinks leaving them at home will lead to Gary eating them. Meanwhile, Plankton is home after failing to steal the formula again. He sees the sea chimps and shrinks himself to their size so he can practice ruling the world.

He gets the sea chimps to all be slaves to him as well as getting a castle all to himself. While riding an old chimp, another one shoots a dart at him, causing him to collapse. Afterward, Plankton finds himself tied onto sacrificial poles as a tongue from above comes down to lick him.

He bites the tongue, causing Patrick to get hurt, as it was his tongue. He starts drinking all the water in the aquarium, but before all the sea chimps get swallowed, Plankton puts them all within his shrinking belt.

When they get eaten, SpongeBob arrives and sees that Patrick was the one eating his sea chimps the whole time, not Gary. Denying such an allegation, Patrick walks out. Right after, the sea chimps and Plankton grow to larger size while expanding Patrick's belly. Seeing that his lie was exposed, Patrick sheepishly admits to eating them and says the sea monkeys were not that good. The sea monkeys then get out of Patrick's stomach. SpongeBob greets them, stating he is their master, but they refuse to serve as pets anymore and decide to live in the Chum Bucket, causing Karen to panic and abandon the restaurant. Plankton concludes that they cannot stay in the Chum Bucket anymore and launches the restaurant several miles away from him. The episode ends with Plankton getting eaten by Patrick and his crown coming out of Patrick’s mouth. 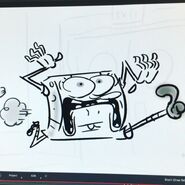