2002 - 2004; 2015 - present
Kazimieras Gediminus "Kaz" Prapuolenis (born July 31, 1959; age 62) is an American cartoonist and illustrator, and one of the most renowned living "underground" cartoonists of all time. He is a SpongeBob SquarePants crew member, who had worked on season 3 and seasons 9 onwards. He returned to SpongeBob as an animation writer in the second half of the ninth season.

In the 1980s, after attending New York City's School of the Visual Arts, he was a frequent contributor to the comic anthologies RAW and Weirdo. Since 1992, he has drawn Underworld, an adult-themed syndicated comic strip that appears in many alternative weeklies.

Kaz's comics and drawings have appeared in many alternative and mainstream publications including Details, The New Yorker, Nickelodeon Magazine, The Village Voice, East Village Eye, Swank, RAW, Eclipse, N.Y. Rocker, New York Press, Screw and Bridal Guide. He has continued to contribute to comics anthologies such as Zero Zero.

Kaz has also worked on several animated television shows including SpongeBob SquarePants, Camp Lazlo, and Phineas and Ferb. He was co-executive producer of Get Blake!.

He, along with Tom Stern, are in charge and are developing and writing the script for the next movie: Saving Bikini Bottom. 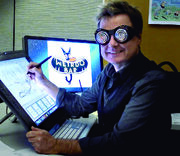