View source
If you were looking for the article about the character, then see Virus.

"The Grill is Gone"
"Karen's Virus" is a SpongeBob SquarePants episode from season 11. In this episode, Karen gets a computer virus, and it's up to SpongeBob to get it out of her.

The episode starts with Karen obtaining a virus due to hanging out with a sick computer. Plankton sees this and needs someone stupid enough to want to fix her, and just at the right time, SpongeBob is next to the Chum Bucket. After deciding that the mission will be called "Operation: Save Karen," Plankton transports SpongeBob into Karen to defeat the virus.

Plankton gives SpongeBob directions on how to find the virus and soon after he starts looking for it, he falls down into a hole the virus made and sees it eat through Karen. Meanwhile, Karen becomes completely delusional and escapes the Chum Bucket into the Krusty Krab, where she causes chaos. SpongeBob flings back up onto the surface of the inside of Karen and continues searching for destruction caused by the virus, but accidentally activates the security button. Thankfully, before he gets shot by a laser, he is saved by Ideal Plankton, who is what Karen pictures Plankton as.

As the virus continues destroying parts of Karen, Ideal Plankton and SpongeBob confront different characters how Karen sees them, and gets into a battle with them. After they defeat them, the two see the virus on the other side of a trench. SpongeBob uses a rope to cross the trench, but when Ideal Plankton tries to cross, part of the ground breaks and he falls into the trench, forcing SpongeBob to have to save Karen by himself.

Karen is shown driving a car to a party at Wagon Wheel due to how delusional she is. Inside Karen, the virus is shown to be eating Karen's memories, prompting SpongeBob to try and defeat it. After his attempts fail, he gets so scared he breaks into pieces. When he goes back into normal form, he winds up with one extra piece and throws it onto the ground. The virus eats this, telling SpongeBob that the virus is simply hungry. The episode ends with SpongeBob taking out the virus from Karen and letting him eat a Krabby Patty to satisfy how hungry it is.

According to Dave Cunningham, in a Q&A with Encyclopedia SpongeBobia, the episode took longer to produce than normal and he, Sherm Cohen and Adam Paloian asked colleagues to give more time if they felt they needed it - "it paid off."[2] 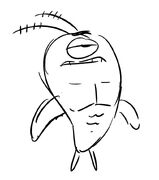 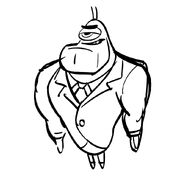 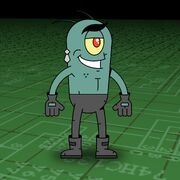