Start a Wiki
If you were looking for the article about the DVD, then see Karate Choppers (DVD).

"Karate Choppers" is a SpongeBob SquarePants episode from season one. In this episode, SpongeBob and Sandy get obsessed with karate.

SpongeBob and Sandy are practicing karate against each other. After fighting in SpongeBob's house and at Barg'N-Mart, Sandy tortures SpongeBob's tongue with a drop of Volcano Sauce, and tells him that she will sneak up on him and fight him tomorrow. At the Krusty Krab the next day, SpongeBob thinks anyone or anything can be Sandy, so he is cautious and does not work much. When he strikes one of the customers, Mr. Krabs demands to know what is going on, so SpongeBob explains to him that he is doing karate.

Therefore, Mr. Krabs tells him to stop doing karate or else he will fire him. Later, Sandy attacks him, and though SpongeBob attempts to explain Mr. Krabs' warning, Sandy does not listen to him. At that moment, Mr. Krabs sees this and thinks he is doing karate with Sandy, so he ultimately yells SpongeBob that he is fired. This upsets SpongeBob and he starts throwing a big tantrum. Feeling so guilty for getting her friend in trouble, Sandy quickly explains to him that SpongeBob tried to warn her to stop karate, but she wouldn't listen. Sandy begs Mr. Krabs to give SpongeBob his job back and they promise they'll never do it again. Mr. Krabs gives SpongeBob his job back and tells him not to do anymore karate, as he feels that it is poisoning his mind. 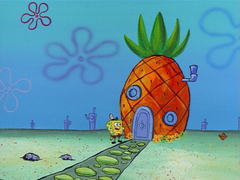 The two try to forget about karate and go to Seashell Park for a picnic. However, while slicing sandwiches, they begin doing karate against each other again.

After they destroy the park, Mr. Krabs catches them once more. SpongeBob admits the truth and explains that he cannot help himself. However, instead of firing SpongeBob, Mr. Krabs decides to have SpongeBob and Sandy slice the Krabby Patties with karate chops which makes twice as much money as before. 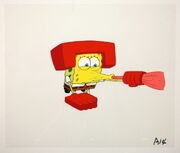 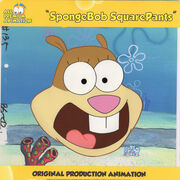 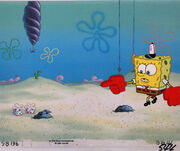 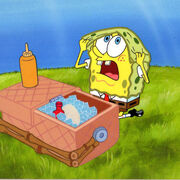 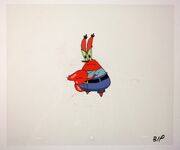 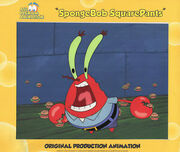 
*On The Complete 1st Season and The First 100 Episodes DVDs, "Mavericks" is replaced with "El Dementia" by The Surfdusters.