Karate is a fighting style which is practiced by SpongeBob and Sandy in the series and once by Patrick and Squidward in "Karate Star" and "Squid Defense" respectively. It is first practiced in the episode "Tea at the Treedome."

There is a specific gear worn in the series whenever it is performed.

Karate is a martial art developed in Okinawa, Japan. It was developed from indigenous fighting methods called te and Chinese kenpō. Karate is a striking art using punching, kicking, knee and elbow strikes, and open-handed techniques such as knife-hands, the karate chop. Grappling, locks, restraints, throws, and vital point strikes are taught in some styles. A karate practitioner is called a karateka.

The way it is pronounced as "Kah Rah Tay" in the series is a rather accurate to how it is actually pronounced ("Kah-Rah-Teh").

SpongeBob likes karate and is quite skilled at it, but Sandy has shown herself to have more skill. SpongeBob wears red gear, consisting of headgear and gloves, and it appears as an attack for SpongeBob in all of the Nicktoons games except SpongeBob SquarePants featuring Nicktoons: Globs of Doom. He usually pronounces it as "Kah-rah-tay." Because his gear is red, it shows that he has high experience with martial arts but acts as an easy target for Sandy.

She happens to know when SpongeBob is about to surprise her, and attacks him before he has a chance to attack. This shows that Sandy is much better at karate than SpongeBob. Ironically, she is defeated by him on two occasions in the episode "Karate Choppers." Sandy has been shown to have equal skill to SpongeBob in early seasons. She has since gotten better.

Her karate gear is - depending on the episode - either green or pink and consists of only a pair of gloves.

During the events of "Karate Island," SpongeBob is invited to visit Karate island, while Sandy is not, but her karate is much better than his. Sandy decides to tag along. When SpongeBob is chained to his throne, Sandy is forced to use her karate skills and save SpongeBob. Her gear is also an attack that is used in Nicktoons: Battle for Volcano Island.

Patrick has only done karate in "Karate Star," but apparently, he is very good at it. He can chop a cinder block, a ship, and many other things in Bikini Bottom. However, the karate got to his head, which caused him to chop everything in sight, so he quit doing the sport. His gear was blue, and consisted of a headgear and gloves. Since his gear is blue, it shows that he lacks discipline.

In the episode "Squid Defense," Squidward asks SpongeBob to teach him karate after he is chased off by a stranger. However, he is an extremely poor learner and struggles. When he does learn karate, he uses it for revenge. Squidward is the only one who did not wear any karate gear.

Udon is a martial artist and the main antagonist of the episode "Karate Island." His karate skills are impressive, as he is able to match Sandy. However, he was eventually defeated. Udon is most notable for being the only fish to practice karate.

Fuzzy Acorns is Sandy's karate master who appears in the episode "The Way of the Sponge." It is revealed that he was the one who teaches Sandy everything about karate but does not think SpongeBob is all good.

However, Acorns is "defeated" by SpongeBob after getting beat up by his cooking skills. Fuzzy Acorns also issues karate belts to those who are worthy to hold it, with the clear belt being the lowest to the blacker belt being the highest.

SpongeBob SteelPants is shown to wear the same karate gear as SpongeBob himself in the video game Battle for Bikini Bottom. He is known to do arm spin and smack attacks during the final boss battle and uses the syllables of the "karate" pronunciation as weapons.

Karate Island is a place where the supposed "King of Karate" is destined to arrive at. When SpongeBob and Sandy arrive, it is revealed to be a hoax which the proprietor, Udon, forces others to buy real estates. It seems that they randomly chose people to be forced into buying the estates as SpongeBob and Squidward are scammed with the title of whatever their "specialty" is. 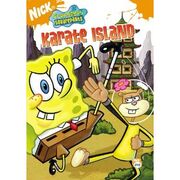