Encyclopedia SpongeBobia
Register
Don't have an account?
Sign In
Advertisement
in: SpongeBob SquarePants, Nickelodeon, The SpongeBob Movie: Sponge on the Run,
and 2 more
English

It depicts younger versions of the main characters from the original show. SpongeBob, Patrick, Squidward, and Sandy are campers; Mr. Krabs is the camp director; Pearl is a baby; Mrs. Puff is the scoutmaster and activity teacher; Plankton and Karen are camp chefs; and Gary is a formerly stray snail who becomes SpongeBob's pet.

The show is set at a summer sleepaway camp called Camp Coral, located in the Kelp Forest. SpongeBob SquarePants is a ten-year-old camper who wears a red cap. Mr. Krabs is the camp director, and he stays in a cabin with his baby daughter, Pearl. Other campers include SpongeBob's friends, Patrick, Sandy, and Squidward. Squidward is slightly older than the others and works as a junior counselor. Mrs. Puff is the teacher of arts and crafts, as well as the scoutmaster who keeps an eye on the kids. Plankton and Karen are the chefs of the camp. The gang spends the summer catching jellyfish, building camp-fires, and swimming in a goo lake called Lake Yuckymuck.[2]

The ten main characters from SpongeBob SquarePants returned for Kamp Koral, along with two new characters: Nobby and Narlene, a pair of narwhals who live in the woods around the campsite. 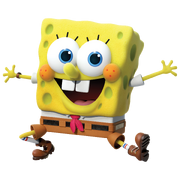 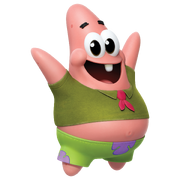 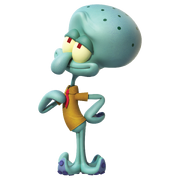 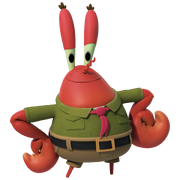 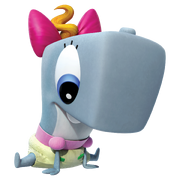 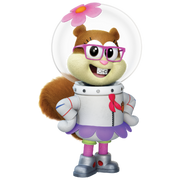 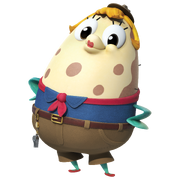 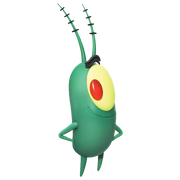 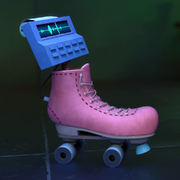 Various character designs are used for campers in the background, such as Kevin C. Cucumber, Bubble Bass, and Craig Mammalton. Younger versions of Perch Perkins, Nosferatu, Larry the Lobster, and Lady Upturn reappear as well.

The characters and locations in Kamp Koral are based on scenes from the third movie, The SpongeBob Movie: Sponge on the Run.[22] In the movie, Camp Coral is featured in several flashbacks. All main characters that appear in them are aged up by a year in the spin-off;[22] some designs (such as SpongeBob, Patrick, and Mrs. Puff's camp outfits) remained mostly the same, whereas others (such as Squidward and Sandy's designs) were heavily updated. In the movie, Mrs. Puff was the only camp counselor, but in the series, she is joined by Mr. Krabs as the camp director.[22]

The series is being animated by a different studio from Sponge on the Run to decrease the time and cost spent on animation. It is being animated by Technicolor's animation studio, in Bangladesh, India;[23] the corporation also owns Mikros Image, which provided animation for the third movie. Executive producer Vincent Waller said in an interview, in regards to the final animation: “The main challenge was finding a crew capable of building a new world, from the sand up to the beautiful ocean/sky above our Kampers, at breakneck speed to have our show premiere in March [...] Having seen other CG TV shows, we were very worried we wouldn’t be able to hit the same high mark when it comes to the characters’ acting and posing. But those challenges excited the crew, and they came up with innovations to hit the wild and varied expressions our storyboard artists were throwing at them.”[22] Tom Kenny, said Hillenburg and him were a little unsure about the CGI animation in the spinoff, since the main one is 2D, but the animation crew founded a way how to do the animation in CG.[1]

Brian Robbins stated that he helped create the idea for Kamp Koral. In October 2018, Robbins became the president of Nickelodeon.[24] On his "second or third day" at Nickelodeon, he "was asked to go to a SpongeBob season 12 or 13 pickup meeting" and "asked a lot of questions." This made him realize that SpongeBob had "basically stayed the same" and inspired him and others together to come up with ideas for spin-off shows[25] and new characters.

On February 14, 2019, it was announced that an unnamed spinoff of SpongeBob SquarePants was in the works at Nickelodeon.[26][27] On June 4, 2019, it was announced that a CG-animated spinoff of SpongeBob SquarePants under the working title of Kamp Koral was officially green-lit with a 13-episode order.[28][29]

On February 19, 2020, the show's official title was given as Kamp Koral: SpongeBob's Under Years.[30] It was also announced that the voice cast from SpongeBob SquarePants would return for the spinoff series. Those cast members being: Tom Kenny, Bill Fagerbakke, Rodger Bumpass, Clancy Brown, Carolyn Lawrence, Doug Lawrence, Mary Jo Catlett, Jill Talley, and Lori Alan. It was also announced that Carlos Alazraqui and Kate Higgins would voice two new characters: Nobby and Narlene, twin narwhals.[31] On January 8, 2021, a six-minute sneak peek of "The Jellyfish Kid" was shown in a video called "Kamp Koral: SpongeBob's Under Years SNEAK PEEK! | Coming Soon to Paramount+" uploaded by the SpongeBob SquarePants Official YouTube channel.[32] That video went on to get voted with more dislikes than likes and later became unlisted. This same sneak peek footage was shown on January 10, 2021 during an NFL Wild Card game playoff aired on Nickelodeon USA.[33] On January 11, 2021, one day after the official television airing on Nickelodeon USA, the six-minute sneak peek footage of "The Jellyfish Kid" was reuploaded by the SpongeBob SquarePants Official YouTube channel under a video with a slightly different title called "Kamp Koral: SpongeBob's Under Years PREVIEW! | Coming Soon to Paramount+."[34] Unlike the original upload, this video never got unlisted and also has a different image in the thumbnail. A promotional short titled "I'm Urchin You to Leave" was included as a bonus feature on The SpongeBob Movie: Sponge on the Run DVD and Blu-ray that was released on February 2, 2021 in Canada and on July 13, 2021 in the United States.

Upon the Kamp Koral announcement, former series showrunner Paul Tibbitt tweeted that SpongeBob SquarePants creator Stephen Hillenburg would not have approved of a "younger SpongeBob" spin-off, calling the spin-off "greedy, lazy executive-ing."[35] Hillenburg was strongly against the idea of aging SpongeBob down to a child. According to Tibbitt: "Steve [Hillenburg] would always say to me, 'You know, one of these days, they're going to want to make SpongeBob Babies. That's when I'm out of here.'"[36] When Hillenburg first pitched the show in the 1990s, Nickelodeon wanted to send SpongeBob to school.[37] Hillenburg was strongly opposed and wanted SpongeBob to be a childlike adult: a character with a child's optimistic personality and an adult's responsibilities.[38] He felt that a show about child-aged SpongeBob went against his creative vision.[38] Therefore, he created the character of Mrs. Puff and her Boating School as a compromise.

On June 5, 2019, Rob Renzetti, another former Nickelodeon employee and creator of My Life as a Teenage Robot, said that he disapproved of the spin-off idea[39] and also retweeted Tibbitt's statement.[40] In response to a fan's question and the negative backlash, Vincent Waller asked for fans to not jump to conclusions about the spin-off series. He stated that he hopes the show will speak for itself upon its release.[41][42][43]

An incorrect rumor was spread that Hillenburg's family is working on Kamp Koral. This was revealed to be false, as none of his family members have ever worked on any SpongeBob SquarePants media before, and it is unknown if they know about the spin-off. Waller stated that he has no "first-hand knowledge" of what the Hillenburgs are doing, since they are not working on Kamp Koral. He also wrote in 2020: "I can only guess they are doing their level best to deal with the grief of losing their husband, father, brother and son."[44] In 2021, Waller made a February 4 statement followed by two February 5 statements:

Allie Leatherman of Legacy Press argues that the series is overplaying the slapstick for comedy purposes that children would not even find funny. She also argues that, "The shadows are extremely harsh, the color palette is ugly, and the backgrounds are boring and lifeless. The animation makes it unclear if it even takes place underwater. The character design is alright other than Patrick, who just looks like pink mush in the shape of a star."[48] Jessica Curney of The Michigan Daily said that the series isn't needed and unnecessary for the franchise and that it doesn't have the same "spark" as the first three seasons of the original show.[49]

The series features a variety of new locations, as well as some settings based on places from the original series.

Every Location in Kamp Koral 🏕 - A Tour of Kamp Koral! - SpongeBob