Start a Wiki
If you were looking for the article about the Justin from the episode "Mr. Krabs Takes a Vacation", then see Justin Flipperlake.

Justin Beardfish is a character who appears in the book SpongeBob Tees Off.

He is a teenage fish who wears a yellow shirt, a brown coat, and blue slacks. He has freckles and long, red hair combed over his forehead.

In SpongeBob Tees Off, he is one of several celebrities who visits Bikini Bottom. When he enters the Bikini Bottom Shell Club to watch Annika Swordfish's golfing tournament, a crowd of fans surrounds him, asking for pictures and interviews. He is a friend of Grubby Grouper and Jessica Albacore. 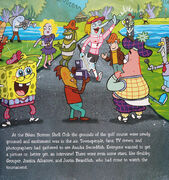 Add a photo to this gallery
Retrieved from "https://spongebob.fandom.com/wiki/Justin_Beardfish?oldid=1967514"
Community content is available under CC-BY-SA unless otherwise noted.