View source
This is the page about the episode. For other uses, see Jellyfish Jam (disambiguation).

A jellyfish insists on following SpongeBob home after a day out at Jellyfish Fields, so SpongeBob decides on keeping it as a pet at his home. Squidward warns SpongeBob that jellyfish are wild animals and that he should not attempt to domesticate it, but SpongeBob completely ignores him. At home, SpongeBob dances with the jellyfish to loud techno rave music, which annoys Squidward to no end. After 12 hours of this form of nonstop partying, SpongeBob finally decides that it is time to go to bed, but this jellyfish does not want to stop. SpongeBob eventually forces it to go to bed by tying a leash around it and ties it to his bed. Gary tries to tell SpongeBob he should not be keeping a wild animal, but SpongeBob does not listen. During the night, while SpongeBob sleeps, the jellyfish escapes and brings several other jellyfish into the house.

The next morning, SpongeBob wakes up to find his living room filled with dozens of dancing jellyfish. He attempts to make them leave, but to no avail. Squidward, annoyed that the music has been going on for 18 hours and prevented him from sleeping, angrily calls SpongeBob on his conch phone to tell him that he has had enough of the loud music. A jellyfish picks it up and sprays him with jelly over the phone. Irritated, Squidward decides that "two can play at this," and starts loudly playing his clarinet, angering the jellyfish with his terrible playing, and causing them to start destroying SpongeBob's house. SpongeBob asks Squidward to play his clarinet a little "better," as an insulted Squidward sarcastically responds to this request. However, Squidward intentionally starts playing even worse and much louder with speakers and a microphone. This prompts the jellyfish to angrily go to his house, as he cowardly tries to promise to stop playing, but they sting him before returning to SpongeBob's house. A sting-covered Squidward says to SpongeBob, "Everybody's a critic. You won't be hearing from me anymore," and gives him his clarinet before leaving. The jellyfish hastily take it from SpongeBob, break it in half, set it on fire, and dance around it.

This brings SpongeBob to the limits of his patience, and he attempts to remove the stereo system, destroying it in the process. The enraged jellyfish begin stinging and chasing him. SpongeBob and Gary go up to the roof of the house, but the swarm follows them outside and surrounds them. SpongeBob tells Gary that he was right about attempting to keep a wild animal in his house, then Gary soothes the jellyfish away by clicking his eyes together. SpongeBob tells Gary to keep doing this and puts him on his head, walking downstairs and out the front door, followed by the swarm. As he leads them back to Jellyfish Fields, more sounds accompany Gary's clicking, eventually becoming a full-fledged symphony. After resettling the jellyfish, SpongeBob quickly returns home with Gary.

In the last scene, SpongeBob shakes hands with Gary's eyeball as the French narrator declares, "Today, SpongeBob has learned one of the sea’s harshest lessons; wild animals can throw very wild parties." Then the severely stung Squidward is shown settling into his bathtub to recover from his stings.

According to The First Season Crew On... on The Complete 1st Season DVD, Jellyfish Jam was pitched on September 28, 1998.[3] 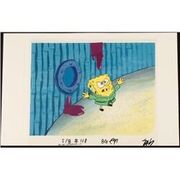 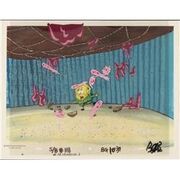 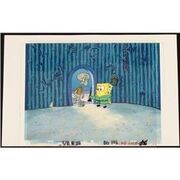 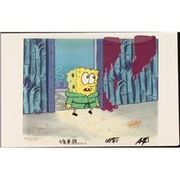 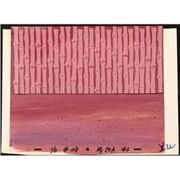 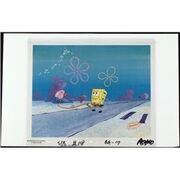 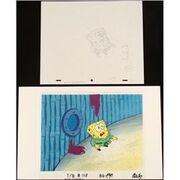 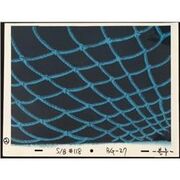 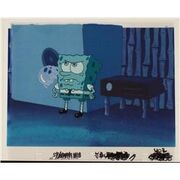 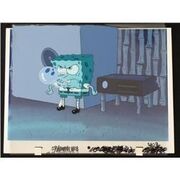 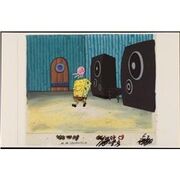 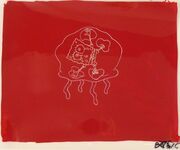 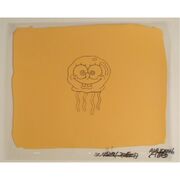 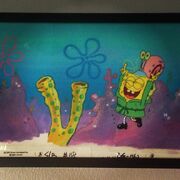 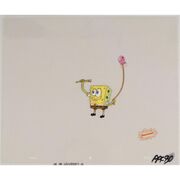 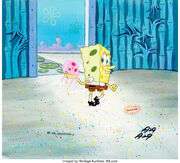 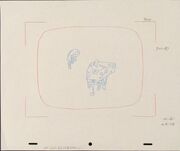 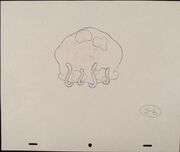 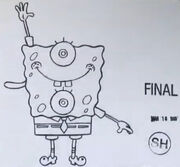 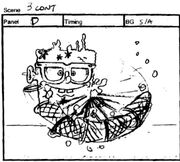