It Came from Goo Lagoon (DVD)

View source
If you were looking for the article about the episode, then see "It Came from Goo Lagoon."

It Came from Goo Lagoon

What do microwave ovens, dry cleaning, corn dogs and purple floaty things have in common? They can all destroy Bikini Bottom, that's what! But will they? Find out in this spine-tingling SpongeBob SquarePants adventure, It Came From Goo Lagoon! Horrors. A giant purple ball of goo has risen from the deep and it's threatening to release its toxic, gooey wrath all over the city. And according to Sandy, Bikini Bottom's resident know-it-all, this is not good. What's worse, Plankton has big, evil plans for this bubble. Will harnessing the bubble's power finally get Plankton the Krabby Patty recipe? Or will SpongeBob's bubble skills save the day? Then, the horrors continue when Plankton sabotages SpongeBob's trusty spatula, SpongeBob's deepest secrets are revealed when Squidward steals a peek in his personal diary, Patrick wreaks havoc throughout Bikini Bottom when he becomes wannabe super hero, Patrick Man, and SpongeBob is sent back to school to renew his milkshake-making license. 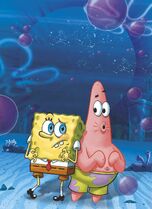 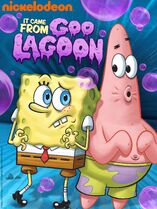