"Insecurity Guards" is a SpongeBob SquarePants episode from season twelve. In this episode, SpongeBob and Patrick volunteer as guards at the museum, while Squidward attempts to hang his painting unnoticed.

The episode begins with an art critic denying Squidward's painting as it stinks. At the same time, Patrick catches the painting when it is thrown away by the art critic and later reveals to Squidward that he is the museum's security guard. This makes Squidward understand that since the security is awful, he can hang his painting in the museum with ease.

Patrick appoints SpongeBob to junior guard and gives him a tour of many of the exhibits of the museum as well as what rules he needs to enforce. While Patrick is giving SpongeBob the tour, Squidward goes inside the museum through a window to put his painting. He almost gets caught several times, but successfully puts the painting up.

Unfortunately, SpongeBob and Patrick see Squidward with the painting and think he's stealing it. They chase him through the museum and eventually catch him. The episode ends with Squidward's painting being put up on the museum, making Squidward happy, despite getting arrested by the police. 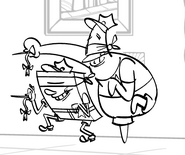