This is the page about Ink Lemonade. If you were looking for the article about the drink, then see Black lemonade.

"Ink Lemonade" is a SpongeBob SquarePants episode from season eleven. In this episode, Patrick's lemonade stand is unsuccessful until he gets a secret ingredient from Squidward.

Patrick is outside running a lemonade stand, yelling "Lemonade!" so he can get customers. Squidward comes outside to find Patrick with no customers, because his jugs are just water. Squidward decides to give Patrick old, rotten lemons, which makes his eye red, also causes his first customer to get sick. Eventually, Patrick decides to replace the lemons with the contents of a toy firetruck, however SpongeBob joins in with Patrick and yells in a megaphone, scaring Squidward and spraying ink out of his nose. Patrick finds this liquid and SpongeBob decides to drink it. SpongeBob gets sick at first but eventually finds it delicious. As customers starts to line up for black lemonade, Patrick has to get more ink.

Squidward, now paranoid thanks to all of the plans Patrick has done, starts to act crazy. Patrick's final plan is to make a haunted area in front of Squidward's house, causing the now paranoid Squidward to spray lots of ink. Eventually, he runs out of the haunted zone and finds out that SpongeBob and Patrick was using his ink to sell lemonade the whole time. Squidward starts to get upset at Patrick and SpongeBob, however he comes up with a plan - opening his own lemonade stand for himself.

Unfortunately, Squidward is unable to make more lemonade, so he chooses to have a customer scare him in order to get lemonade. Don the Whale does, and Squidward sprays ink like crazy over the customers. Eventually the customers finds out the "source" and pukes in Squidward's house. SpongeBob and Patrick also moved out of the lemonade business to sell cookies. As Squidward eats one of them, SpongeBob and Patrick says they used spider eggs as chips, resulting in Squidward screaming out spiders and spraying ink as the episode ends. 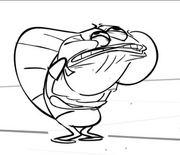 Retrieved from "https://spongebob.fandom.com/wiki/Ink_Lemonade?oldid=1894808"
Community content is available under CC-BY-SA unless otherwise noted.