Incidental 19 is a background fish who appears in the episode "Ripped Pants," the book of the same name, and the book SpongeBob Saves the Day (book).

She is one of the few incidental characters who was removed from the model sheets.

She is a light orange fish with dark orange fins. She has black hair in a beehive shape with a purple headband. She wears green sunglasses and a purple bathing suit.

She is in the crowd watching the weight lifters. She cheers for them, then gets unhappy when SpongeBob just lifts a stick. She later whistles when Sandy lifts two anchors. When SpongeBob rips his pants, her eyes bulge out from behind her glasses, then she starts laughing.

She is also seen gathering when SpongeBob pretends to drown, and watching the Beach Band perform.

She is on the cover drawn by Clint Bond Jr.

She is seen in the "Ripped Pants" segment of the book. 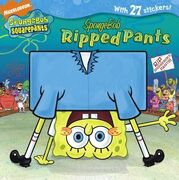 Add a photo to this gallery
Retrieved from "https://spongebob.fandom.com/wiki/Incidental_19?oldid=2627619"
Community content is available under CC-BY-SA unless otherwise noted.