"Wormy"
"Imitation Krabs" is a SpongeBob SquarePants episode from Season 2. In this episode, Plankton disguises himself as a robot version of Mr. Krabs in an attempt to steal the Krabby Patty Secret Formula.

As the episode begins with Plankton in his newest bid for the Krabby Patty secret formula entering the Krusty Krab as a robotic salesman, he presents SpongeBob with an offer for one million dollars if he reveals the formula. SpongeBob explains, in no uncertain terms, that the formula is the property of Mr. Krabs and may not be divulged. Enraged, Plankton bursts out of the robot and threatens SpongeBob with violence, only to be caught by Mr. Krabs and shot out from a straw back to the Chum Bucket. Mr. Krabs stresses the importance of the formula's safety to SpongeBob, who takes it upon himself to be more vigilant. However, SpongeBob attacks a customer mentioning the formula in passing, thinking him to be Plankton in another disguise. To prevent further customer trauma, Mr. Krabs clarifies that the formula will be safe as long as SpongeBob only discusses it with him.

Little do they know that Plankton's newest robotic disguise has been made in the image of Mr. Krabs. He first encounters Squidward, tasked by the real Mr. Krabs to take inventory of the storage room (in response to his wise-guy remark about "why do today what you can put off until tomorrow?"). Plankton, as Imitation Krabs, fails to fool Squidward, but the offer of a day off buys Squidward's silence. SpongeBob enters as Squidward skips out and notices Imitation Krabs, who he believes is Mr. Krabs; the oddities of the robotic suit only slightly faze SpongeBob. When Mr. Krabs starts calling, however, Imitation Krabs distracts SpongeBob and turns into a toaster. To keep Mr. Krabs out of the way after his repeated appearances, Plankton takes out a penny and sends it rolling into Mr. Krabs' office. The enticing coin lures Mr. Krabs out of the restaurant, leaving Plankton's plan unimpeded.

Imitation Krabs finds SpongeBob scrubbing the floors in the kitchen and asks him about the formula. Surprised, SpongeBob says they have not initiated the secret handshake yet, so Imitation Krabs allows SpongeBob to lead them through it. The "handshake" consists of standing on one foot, balancing a glass of chocolate milk on their heads, and singing the Bikini Bottom national anthem. What follows is a ritual that goes on for six and a half hours and consists of many bizarre and ridiculous feats, leaving Plankton worn out from controlling Imitation Krabs. After all this, SpongeBob still will not discuss the formula, causing Plankton to explode in anger at all of the things that he did were seemingly for nothing. However, SpongeBob explains that it simply must not be discussed out loud and holds up a bottle containing the formula in written form.

As Imitation Krabs eagerly reaches for the bottle, the rolling penny from earlier enters the kitchen, followed by the real Mr. Krabs. He gets into an argument with Imitation Krabs, and the two try to convince SpongeBob that they are the genuine article. Unable to handle the situation calmly, SpongeBob threatens the both of them with a vat of tartar sauce until he gets some answers, deciding that the best way to weed out the impostor is to present the two with a quiz about the Krusty Krab. The first two questions are generic ones that anyone who has been to the restaurant could answer and Imitation Krabs answers both correctly. The third and final question is one so complicated that not even the real Krabs can answer it. SpongeBob promptly blasts him with the tartar sauce and rolls him out the door in a fry basket, convinced he is the impostor.

Believing Imitation Krabs to be the real Mr. Krabs, SpongeBob presents him with the formula. As Plankton laughs in triumph, SpongeBob notices the penny that Mr. Krabs was chasing and unwittingly drops it into Imitation Krabs' coin-operated self-destruct mechanism. With only ten seconds until detonation, Plankton briefly ponders the intelligence of such a design choice before making a frantic dash back to the Chum Bucket. Unfortunately, he arrives too late and the robot explodes, obliterating his restaurant and causing the metal fist to crush Plankton (a simple "ouch" shows he is only injured). As the formula bottle rolls back to SpongeBob, he realizes his grave error.

Suddenly, Mr. Krabs is heard screaming for help, and he is shown still in the fry basket fending off a live-action hand wielding a fork. SpongeBob rushes over and carts Mr. Krabs back to the Krusty Krab, apologizing for believing him to be the impostor. Mr. Krabs forgives him, but ends the episode by saying that the penny will be coming out of his paycheck. 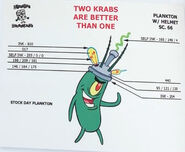 Retrieved from "https://spongebob.fandom.com/wiki/Imitation_Krabs?oldid=3534772"
Community content is available under CC-BY-SA unless otherwise noted.