Start a Wiki
This is the page about Idiot Box. If you were looking for the article about the box, then see Idiot Box (object).

"Idiot Box" is a SpongeBob SquarePants episode from season three. In this episode, SpongeBob and Patrick play with a box.

This episode starts with SpongeBob and Patrick waiting for the mail. Squidward sees a large box being delivered to SpongeBob and Patrick. They open the box, which contains a giant flat-screen television, and this heavily surprises Squidward. Patrick and SpongeBob throw the television out but keep the box to play in it. Squidward asks why they threw the television out, and SpongeBob explains that "We don't need television, as long as we have our... imagination." Squidward, not wanting any part of this, asks for the television, and they let him have it. Once he takes the TV back inside his house, he realizes that the remote control is missing and he goes back outside for it. He hears SpongeBob and Patrick begin - supposedly - to mountain climb inside the box and, annoyed by their stupidity, he gives the box a hard kick. A sound of an avalanche suddenly erupts from the box, shocking Squidward. Concerned, he taps the box, prompting another avalanche. Squidward hears a critically injured SpongeBob and Patrick saying that their limbs are frozen and that they have to cut them off, and rushes over to the box, opens it, and the noises immediately stop. He questions them about the noises, but they act oblivious and he leaves. Suddenly, the sound of a helicopter is heard and Squidward ducks. Realizing that it is coming from the box, he angrily opens the box and confronts them again. SpongeBob simply tells him that all of it is coming from their imagination. Squidward says that he has plenty of imagination, to which Patrick replies, "Good, now all you need is a box." Squidward gets out a hat box and tries to imitate SpongeBob and Patrick's experiences, but fails. After kicking his box in frustration, he hears the sound of police sirens outside. Thinking that his kicking of the box is the cause, he goes outside with his box to apologize. He is quick to realize that the noises are actually coming from the box SpongeBob and Patrick are playing in. Furious, he kicks the box he was holding, which Patrick retrieves, saying, "Whoopee! Another box!" then continue making noises.

Squidward then begins watching TV to get his mind off the box, but all the programs that are on involve boxes. He then hears a space shuttle launch. As he tries to think of how they could possibly manage to make such realistic sound effects, it dawns upon him that they are probably using a tape recorder. Angered, he marches outside and demands the tape recorder from SpongeBob and Patrick. SpongeBob tells him that they do not have a tape recorder, which Squidward does not believe. He decides to join them in the box to see how they are managing to make the sound effects. After being asked where he wants to go, he asks to go to "Robot-Pirate Island." However, he sees nothing but SpongeBob and Patrick closing their eyes and saying stereotypical phrases of robots and pirates. Squidward returns to his house and soon hears the sounds of an epic robot-pirate battle. Having enough, Squidward decides to sneak in the box after SpongeBob and Patrick go to bed to find a device that could make the sound effects. The show cuts to late at night, when a pirate victory celebration is heard.

Once SpongeBob and Patrick abandon the box and go to bed, Squidward sneaks outside and enters the box, looking for something that would make the noise. Squidward finds no such device after a scan of the box. Realizing that the box is, in fact, empty, Squidward wonders if it really was their imagination that caused the sound effects, but he immediately dismisses the notion, thinking that it is ridiculous. He mockingly starts pretending to be a race car driver, but suddenly he begins to hear noises. He imagines himself racing, and feels all the movements of actually driving a race car. However, in reality, these sounds and movements are due to a garbage truck hauling the box away. It is then dumped into the landfill, and Squidward flies out of the box, landing face-first in a pie, then the box falls on him. The next morning, SpongeBob and Patrick realize that their box is gone, and SpongeBob decides to visit Squidward. The episode ends with SpongeBob and Patrick walking to Squidward's house (unknown to them, he's not at home). 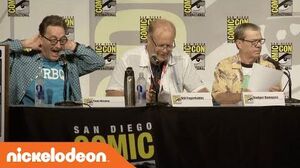 SpongeBob SquarePants ~ Because I already cut off my own arms!