1416911863 (10)
978-1416911869 (13)
Ice-Cream Dreams is a SpongeBob SquarePants book by Nancy Krulik and illustrated by Heather Martinez. It was published by Simon Spotlight/Nickelodeon on September 21, 2004. It has 24 pages and is based on the scene in The SpongeBob SquarePants Movie where SpongeBob and Patrick go to Goofy Goober's Ice Cream Party Boat.

"SpongeBob has always dreamed of becoming the manager of the Krusty Krab. When Squidward gets the job instead, there is only one thing for SpongeBob to do -- head to Goofy Goober's Party Boat and drown his sorrows in sundaes!"

The book is one of five books about The SpongeBob SquarePants Movie. It starts as SpongeBob is tearing off his calendar and where it says that it is the grand opening of the Krusty Krab 2. SpongeBob says that he has been the employee of the month 374 times in a row. He is then shown getting ready and heading to work. Afterward, he goes up on stage when Squidward gets manager while thinking he did.

When he finds out he did not get the job, he walks away sadly to the Goofy Goober's Ice Cream Party Boat. Patrick is there and orders the Triple Gooberberry Sunrise, which SpongeBob takes an interest in eating. When he gets his and they both eat their sundaes, they keep asking for more while demanding the waiter's attention. Then, they go up on stage and sing with the Goofy Goober peanut, but then pass out. SpongeBob wakes up and goes to work in a bad mood. 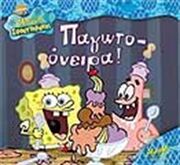 Japanese cover
Add a photo to this gallery

Retrieved from "https://spongebob.fandom.com/wiki/Ice-Cream_Dreams?oldid=3459875"
Community content is available under CC-BY-SA unless otherwise noted.