I Was a Teenage Gary

"SB-129"
"I Was a Teenage Gary" is a SpongeBob SquarePants episode from season 1. In this episode, SpongeBob leaves Gary in the care of Squidward and when he gets back, he transforms into a snail after accidentally being injected with snail plasma.

In the beginning of the episode, SpongeBob is helping Gary get some exercise by putting the snail on his exercise wheel and throwing his toy on the other side of the room. Gary, being a snail, takes until the next morning to bring the toy back to SpongeBob, at which point Patrick comes in and reminds SpongeBob about the Jellyfishing Convention in Ukulele Bottom that weekend. Realizing that he will not be able to take Gary, SpongeBob hoists the responsibility of feeding onto Squidward.

SpongeBob takes Squidward around his house, telling him that he will have to feed Gary for three days. There are very large cans of snail food with the words "morning" and "night" written on them so that Squidward will be able to keep track. Eager to get rid of both of them, Squidward lies and says that he will do it to get SpongeBob and Patrick to leave. Finally they do, and Squidward runs out of SpongeBob's house and sits in a lounge chair to sunbathe for the whole weekend, thus ignoring Gary. He soaks up plenty of sun, but Gary is left in the house, looking longingly in the direction where SpongeBob left, horribly neglected.

When SpongeBob gets back, Squidward suddenly remembers that he was supposed to take care of Gary. However, when he goes to get to the snail, he finds him very sick, due to lack of food, water, and attention. Squidward, thinking he will be able to help, tries to give Gary some food. However, Gary is so weak from waiting for SpongeBob to come home, he is limp in Squidward's arms and will not eat. Squidward puts Gary down as he hears SpongeBob and Patrick saying goodbye to each other and tries to force feed Gary. When he hears SpongeBob coming in, Squidward gives up and puts all of Gary's food into his mouth. He greets SpongeBob awkwardly and explains that he was only checking on Gary.

Just as Squidward is about to leave with a smirk on his face, Gary slowly enters the room. SpongeBob realizes that something is wrong, and quickly calls the local veterinarian, Dr. Gill Gilliam. The vet comes over to SpongeBob's house and concludes that a syringe full of snail plasma must be administered to Gary; Dr. Gilliam leaves SpongeBob with the syringe, claiming that he is too squeamish to perform the injection himself. SpongeBob asks Squidward to give Gary the plasma, as he too is squeamish, and Squidward reluctantly agrees. However, an anxious SpongeBob constantly moves Gary around instead of holding him still, fearing that Squidward's attempts to inject the plasma in a quick stabbing motion will hurt Gary. In the commotion, Squidward accidentally injects SpongeBob with the plasma, causing SpongeBob to worry about the consequences; Squidward tells him not to worry.

As the two argue, Gary goes to take a drink of water and immediately feels better. Annoyed, Squidward leaves, insisting to SpongeBob that nothing will happen. Sometime later, SpongeBob starts acting slow and somewhat like a snail, as well as eating Gary's food himself after SpongeBob thinks that he is fine like Squidward had said. When he goes to the bathroom, his eyes stretch out of his body and grow, his body becomes flat to the ground, his arms and legs disappear into his body, his body reshapes itself, and he also loses the ability to talk after saying "Something is wrong with meeeeeeeeeow!" As a finished result, SpongeBob has turned into a snail.

Afterwards, he goes over to Squidward's house to get help, but Squidward is terrified of the fact that SpongeBob turned into a snail because of his lousy aim ,and he throws the snail plasma away and he tries to reassure himself. He hears SpongeBob at the door and starts blocking the doors and windows and tries to run and hide from SpongeBob as he realizes that he should have taken care of Gary and none of this would ever have happened if he had. SpongeBob chases him for help, but Squidward keeps running, thinking he is under attack, and ultimately makes a mess of his house. Amongst the chaos, Squidward accidentally injects himself with the plasma, turning him into a snail as well, ironically getting his well-deserved punishment for his gross negligence towards Gary.

The ending has Gary, SpongeBob, and Squidward meowing to the tune of "Blow the Man Down" on top of a fence. Patrick, who has been awakened and annoyed by this, yells at them to clam up and throws a boot at Squidward, knocking him off the fence while the screen fades to black. 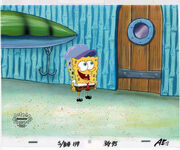