View source
If you were looking for the article about the DVD, then see I'm Your Biggest Fan.

"Mermaid Man and Barnacle Boy III"
"I'm Your Biggest Fanatic" is a SpongeBob SquarePants episode from Season 2. In this episode, SpongeBob attempts to join the Jellyspotters.

As the episode starts off, SpongeBob and Patrick are attending the Biannual Jellyfish Convention. Patrick takes pleasure in touching every display in sight, much to the ire of the security guard. SpongeBob, meanwhile, focuses on the "Jellyspotters," a famous jellyfish enthusiast club, and fawns over its leader, Kevin the Sea Cucumber. At first, Kevin rebuffs SpongeBob's adoration. However, after realizing that SpongeBob will go to any lengths to please him, Kevin decides to let him try out for the Jellyspotters, thinking his antics will make for a good laugh.

Kevin's first test for SpongeBob is to catch a jellyfish, which proves quite simple for SpongeBob as one immediately flies into his net. Kevin smacks it out in annoyance, causing it to sting him. He revises the quota to two jellyfish, and two jellyfish nestle into SpongeBob's net. Even an increase to 20 jellyfish simply prompts more of them to arrive. Kevin angrily kicks the net, inciting the wrath of the jellyfish. Undeterred, Kevin continues to give SpongeBob many more tests, all of which SpongeBob passes effortlessly while Kevin gets stung relentlessly.

Kevin, covered in stings and extremely frustrated, tells SpongeBob that his final test will be to catch a queen jellyfish. He then ties SpongeBob to a post, provides him a whistle that produces a "Queen Jellyfish call" which sounds much like the word "loser" and leaves him there.

After a great length of time blowing the call, SpongeBob is very tired and prepared to give up before a queen jellyfish finally arrives. SpongeBob's joy is short-lived as he discovers Kevin has gone and the large jellyfish begins chasing him. Eventually, the queen corners him at the edge of a cliff, where it is revealed to be a robot piloted by Kevin and the anchovy club members. Kevin reveals his true intentions to SpongeBob and shows him several other people at the bottom of the pit below, all of whom were his former "biggest fans."

Kevin and his crew start calling SpongeBob a loser. However, before Kevin can force SpongeBob off the cliff, an even larger king jellyfish appears and falls in love with the robot queen. Puckering up for a kiss, the king pursues the contraption until it crashes and reveals its occupants. The furious king chases down SpongeBob, Kevin, and the anchovies, eventually cornering them in a cave. Kevin panics, admitting that he has no actual expertise in dealing with jellyfish and that he was only in it for the fashion. SpongeBob, the only one brave enough to confront the king jellyfish, blows for him a giant pie bubble, which the king happily accepts and leaves with. When an incredulous Kevin asks how he was able to do it, SpongeBob simply tells him that everybody loves pie. The anchovies cheer SpongeBob for his heroism, but Kevin denies SpongeBob club membership for not actually catching a queen jellyfish. Having had enough of Kevin's attitude, the anchovies forcibly remove Kevin's crown which is actually his feeding tentacles and place it atop SpongeBob. SpongeBob is amazed by his new hat, Kevin painfully informing him that's not what it is.

Back at the convention, SpongeBob tells Patrick about his experience and reveals that he turned down the Jellyspotters' offer to join; jellyfishing is, most of all, about the jellyfish themselves. Patrick remarks upon how much SpongeBob has matured regarding hero worship, and the episode finishes as they depart with Patrick's own hero, Jeffrey the Jellyfish, tied up in a wagon with a sad look on his face. 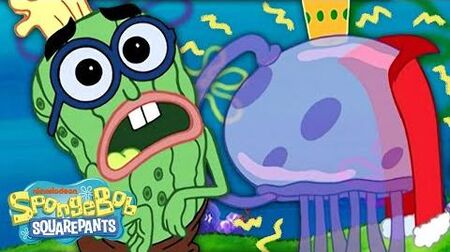