John Lurie and Jim Jarmusch as the Fishermen

"Mermaid Man and Barnacle Boy II"
"Hooky" is a SpongeBob SquarePants episode from season 1. In this episode, fishermen visit Bikini Atoll, and SpongeBob must choose between a warning from Mr. Krabs not to go near the hooks, or a convincement from Patrick to ride them like it's a carnival.

In the beginning of the episode, Mr. Krabs rushes to the Krusty Krab while shouting and panicking like a maniac, telling his customers of the "return of the hooks." The other fish ignore him, while SpongeBob is confused, and Mr. Krabs tells him that he has to try not to go near a hook, or he will be brought up to the surface and eaten or sold at a Gift Shop. As SpongeBob returns to the grill, Patrick shows up from outside the window, saying that the new carnival has come to town, insisting that SpongeBob comes with him. He agrees, assuming that he is not quitting work but just taking a break.

The two friends go to the carnival, but much to SpongeBob's horror, the "carnival" is really the site of the hooks that Mr. Krabs tried to warn everyone about. Patrick deliberately hooks himself and shoots up towards the surface. SpongeBob panics with concern until Patrick returns, explaining that he jumped off and floated down just before he reached the surface. Ignoring what Mr. Krabs said, SpongeBob then plays "hooky" with Patrick.

Meanwhile, at the Krusty Krab, Squidward has taken SpongeBob's place as the fry cook for the time being, and is not making the Krabby Patties correctly, causing a mob of hungry customers to criticize his poor cooking skills. Mr. Krabs bursts out of his office to confront the ruckus and is informed by Squidward that SpongeBob "took a break," making Mr. Krabs angry as SpongeBob has disobeyed his work policy. Mr. Krabs then finds SpongeBob at Fish Hooks Park playing on the hooks with Patrick, shocked at his disobedience. He then scolds the duo for their dangerous behavior and has them make a sailor's promise never to go near the hooks again.

The next day, SpongeBob is heading off to work and keeps his promise about not playing on the hooks, until Patrick appears and pressures him to ignore Mr. Krabs and play on them anyway. As much as he is tempted, SpongeBob refuses, knowing what consequences pursue him should he break his promise. Eventually though, seeing a hook in the middle of the street ceases his resistance and SpongeBob then starts playing on the hooks once again. Unfortunately for him, this time he is unable to get off of it, as the hook is attached very tightly to his pants. He goes to confront Mr. Krabs outside of the Krusty Krab to tell him about his current predicament. Mr. Krabs tries to confirm whether or not SpongeBob broke his promise and continued playing on the hooks anyway, with the latter trying to hide the hook in his pants from view. SpongeBob finally admits to doing so in a regretful and apologetic voice. Mr. Krabs tells him that the only solution would be to take off his pants, which SpongeBob reluctantly does. Since the hook has got his underwear too, he is forced to remove that as well, but SpongeBob is very hesitant to out of humiliation. As he is about to be reeled in by the fisherman, he hangs onto the clam pole as a self-restraint method before the hook tears off the underwear instead and SpongeBob is sent flying onto the Krusty Krab doors naked, with Pearl and her friends laughing at him.

SpongeBob runs back to his house, horrified and embarrassed. Squidward returns to the Krusty Krab with a fishing pole and SpongeBob's underwear, indicating that Mr. Krabs, Pearl, and Squidward got together to teach SpongeBob a lesson about hooks, and Squidward has seen that SpongeBob will never play with hooks ever again.

Just before the episode is about to come to an end, Patrick is dropped off at his house by the bus, trapped inside a tuna can as karma for playing on the hooks, asking if anyone has a can opener. 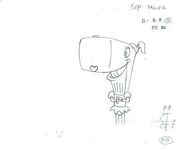 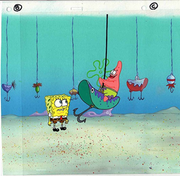 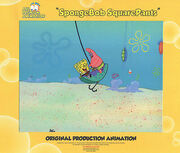 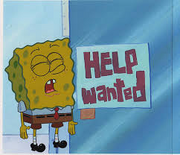 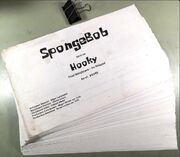 "SpongeBob and Pat as "rebels without a cause" (or a brain), riding fishermen's hooks and jumping off just before being yanked ashore. This episode inspired the song "Riding the Hook" on The Best Day Ever CD, with legendary punk rocker Tommy Ramone playing drums!"