"Home Sweet Pineapple" is a SpongeBob SquarePants episode from season one. In this episode, SpongeBob's house is destroyed by nematodes.

A crowd of hungry nematodes arrives in Bikini Bottom early in the morning. They eat through a variety of items, such as coral and a driving boatmobile with Fred still in it. They then make their way to SpongeBob's pineapple house. They pull out straws and start eating and drinking his house. Meanwhile, SpongeBob and Gary are inside, sleeping, as everything starts to shrink. SpongeBob and Gary wake up, run outside the house, now reduced to what SpongeBob thinks is a small pebble, and see what the nematodes have done. SpongeBob calls Squidward on the phone, and Squidward asks if it is time for SpongeBob to ruin his day. Then Patrick gets up and says "Is it already time to ruin Squid's day?" When Squidward sees that SpongeBob's house is gone, he starts saying goodbye to SpongeBob, but throws a party inside his house, with confetti and streamers flying out of his front windows. Now that the house is no longer there, SpongeBob says that he will have to move back in with his mom and dad. However, Patrick tells SpongeBob to build a new house and SpongeBob agrees with Patrick. Later, SpongeBob and Patrick attempt to build another pineapple house, but things fail. SpongeBob and Gary try to sleep with Patrick, but Patrick won't share his rock, which the two are using as a blanket, and they get into a tug-of-war. After Patrick's snoring makes SpongeBob put corks in his ears, he begins drooling in his sleep. SpongeBob absorbs the drool and waddles over to Patrick. He then puts a giant cork inside his mouth. Later, Patrick has dreams that spiders are attacking him, and hits SpongeBob repeatedly with the rock, crushing him. SpongeBob decides to sleep far away from Patrick, but when Patrick has another nightmare, he sleep-runs to where Spongebob is and pounds him with his rock some more before heading back to where he was and going back to sleeping the way he normally does.

The next day, Squidward gets up early so he can see SpongeBob move back with his parents. When SpongeBob's parents arrive, Patrick begins crying hysterically and attempts to drag SpongeBob's family's car to a stop, and Squidward starts dancing and singing. SpongeBob finds a small pebble (the only thing left when the nematodes destroyed his house), and buries it where his house used to be, because it holds too many memories. He begins to tear up, and one tear falls on the spot where the pebble was planted. However, the pebble is actually a seed, and SpongeBob's tear waters the pineapple seed, which creates a massive vine on the ground, and sprouts the house out before retreating underground, crushing Squidward, who was dancing on the remains of SpongeBob's house with joy. SpongeBob is happy his house came back as he, his parents and Patrick rush over to go inside and everything is back to where it belongs. SpongeBob tells Squidward, while underneath the house, that his home is back forever, much to the latter's dismay. 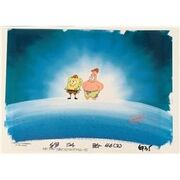 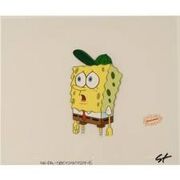 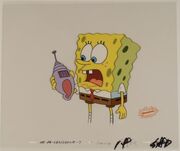