Hide and Then What Happens?

"Shellback Shenanigans"
"Hide and Then What Happens?" is a SpongeBob SquarePants episode from season 7. In this episode, SpongeBob and Patrick's game of hide and seek goes downhill after SpongeBob can't find Patrick anywhere, not knowing he's where he'd least expect.

SpongeBob decides that he and Patrick should play hide and seek. However, Patrick doesn't know what the game is, so SpongeBob tries to explain it to him, but fails. SpongeBob then demonstrates it in a sock puppet version but Patrick still doesn't know how to play.

They then start the game anyways, but Patrick quits before SpongeBob finishes counting, and goes to his home. SpongeBob then finishes counting and starts looking for Patrick. He first guess is Patrick's rock, which is where Patrick is, only to turn it down thinking it would be too obvious. He looks for Patrick at Squidward's house, under the Krusty Krab sign, and at Mrs. Puff's Boating School. Then he goes to look for him at Sandy's treedome. Sandy catches SpongeBob looking for Patrick and she gives him a submarine to look for Patrick.

SpongeBob then goes on an adventure in the submarine before running out of fuel in a stormy area. He begins walking and bumps into a sign, welcoming him to a café and gift shop called The End of the World. He goes inside and asks the clerk if he's seen Patrick. The clerk points to a pink starfish and SpongeBob thinks it is Patrick. However, the pink starfish explains that he is Patrick Not-Star and SpongeBob starts crying because Patrick won at hide and seek. However, Patrick Not-Star explains to SpongeBob that games are about having fun, so SpongeBob cheers up. 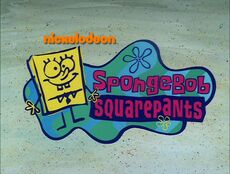