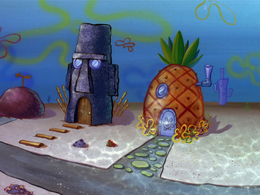 The episode starts with SpongeBob getting ready for the day, as it is the day where he decides to apply for a job at the Krusty Krab. Before going to the restaurant, he lifts a weight with stuffed animals on the sides to warm himself up. SpongeBob starts jogging to the Krusty Krab while Patrick encourages him at his rock.

Mr. Krabs decides to hire SpongeBob as fry cook due to bringing him lots of cash, much to the dismay of Squidward. The episode ends with Patrick asking for an order, causing SpongeBob to cook many Krabby Patties and toss them all at him, flinging him out of the restaurant.


Retrieved from "https://spongebob.fandom.com/wiki/Help_Wanted?oldid=2722260"
Community content is available under CC-BY-SA unless otherwise noted.