The heart-shaped acorn is a gift that Sandy gives to SpongeBob. It appears in the episode "Valentine's Day," the books The World's Greatest Valentine and Deep-Sea Tales, and the video game SpongeBob's Truth or Square.

It is a large acorn in the shape of a heart. It has a wooden arrow through its center.

The heart-shaped acorn has the same role as in the episode.

It appears in a reprint of The World's Greatest Valentine.

It is a happiness object in the second level, "Meeting Sandy Cheeks." If the player completes a tiki challenge and picks the acorn up, it is added to their object collection. In the Xbox 360 version, finding the heart-shaped acorn will give the player the "Valentine's Day" achievement. 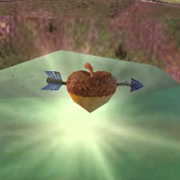 Add a photo to this gallery
Retrieved from "https://spongebob.fandom.com/wiki/Heart-shaped_acorn?oldid=2477280"
Community content is available under CC-BY-SA unless otherwise noted.