"Hall Monitor" is a SpongeBob SquarePants episode from season one. In this episode, SpongeBob becomes hall monitor, resulting in chaos.

At Mrs. Puff's Boating School, it is time to select the hall monitor for the day. Mrs. Puff notices that SpongeBob is the only one who has yet to serve as hall monitor. SpongeBob then moves forward, and after desperately attempting to find another candidate, she is forced to give the hall monitor duties to SpongeBob.

After being elected as Boating School Hall Monitor, SpongeBob gives an extremely long speech, which ends up lasting the entire school day, and his entire time as the hall monitor. Out of sympathy, Mrs. Puff allows SpongeBob to at least wear his uniform until the next day.

However, SpongeBob goes above and beyond the call of duty and decides to become the hall monitor of the city, with disastrous results. His activities include giving directions to traffic, resulting in a massive pile-up, and attacking a couple in the disguise of the "Open Window Maniac," with the intention of showing them the "dangers" of leaving a house window open. Later, SpongeBob finds Patrick eating a strawberry ice cream cone, which drips onto the ground, and labels him as a criminal.

Then, a newspaper boy comes up to SpongeBob and Patrick, and gives them a newspaper titled "Maniac strikes Bikini Bottom." SpongeBob looks at the newspaper headline alerting about a maniac causing trouble around town without realizing it's himself. SpongeBob suggests they stop this maniac, which Patrick turns over a new leaf as a deputy. They end up getting ice cream twice as part of Patrick's idea of a scandalm and then decide to split up to find the maniac, communicating using walkie-talkies, and SpongeBob runs off.

Seconds after SpongeBob leaves, two policemen pull up next to Patrick. They show him a wanted poster with a picture of SpongeBob, which he at first mistakes for the actual maniac, and screams at the mere sight of the poster. The cops patiently assure him that it's just a drawing and not the real thing, and instruct him to tell them if he's seen the person when they show the picture. Patrick agrees to cooperate, but he still screams whenever the police show him the sketch. Eventually, the cops begin scaring him with the wanted poster on purpose by repeatedly showing and hiding the picture as Patrick screams every single time. The amused officers then drive off.

Soon, night suddenly falls and Patrick gets frightened. He finds a poster of the maniac before he sees SpongeBob in the distance across the street. However, Patrick, once again, recognizes him as the maniac rather than SpongeBob. He alerts SpongeBob through his walkie-talkie, and SpongeBob attempts to escape the maniac. Everywhere he goes, Patrick tells him the maniac is there, causing SpongeBob to hide in a mailbox for safety; upon being told that the maniac is also in there, he bursts his arms and legs out of the mailbox, sprinting around the city in a blind panic. In his terrified state, he topples several buildings and eventually crashes through a fence covered in the wanted posters. After seeing a poster from the fence, he finally realizes that he is the maniac.

The police arrive to arrest SpongeBob, but Mrs. Puff appears and scolds SpongeBob for his foolish actions and destruction of the city, much to his sadness. She then explains the situation to them, saying that he is her responsibility. The police interpret this as taking responsibility for the crimes, and she is arrested instead.

Sometime later at Boating School, Mrs Puff is working with the class on their essay while she is being taped on TV from jail, until she tells SpongeBob that he needs to see her after class six months from now. 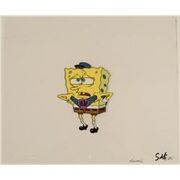 
*On On Amazon Instant Video and iTunes releases, Pomp and Circumstance March #1 is replaced with "Land of Hope and Glory" by Edward Elgar and the R.A.F. Music Library.

Retrieved from "https://spongebob.fandom.com/wiki/Hall_Monitor?oldid=2215390"
Community content is available under CC-BY-SA unless otherwise noted.