"Overbooked"
"Gullible Pants" is a SpongeBob SquarePants episode from season 6. In this episode, SpongeBob is left in charge of the Krusty Krab for a few minutes, and he is gullible enough to obey "advice" from Squidward, leading to disaster.

At the Krusty Krab, Mr. Krabs is counting coins in his office when he splits his fingernail. He dials his phone and books an appointment for a manicure, and as he attempts to leave without SpongeBob or Squidward seeing him, the former stops to ask where he is going. Mr. Krabs answers that it is secret, and appoints SpongeBob in charge while he is gone, much to his excitement.

SpongeBob wakes up Squidward, who claims that Mr. Krabs usually lets him sleep on the job. Later, SpongeBob has to serve a patty but also cook food, and unclog the sink. Not wanting to listen to them, Squidward realizes he can use SpongeBob's idiocy and proceeds to tell him a "secret" Mr. Krabs told him, that customer Incidental 105 wants to be a fry cook. Being a total gullible idiot, SpongeBob is foolish enough to believe this and approaches him and takes him into the kitchen to cook. As he is about to deliver a patty, Squidward lies that SpongeBob's feet are cleaner than his hands. This causes him to serve the food while walking on his hands, to the disgust of customer Incidental 107.

Delivery fish Incidental 119 arrives with supplies that SpongeBob ordered so he can redecorate the Krusty Krab, making it all pretty. Squidward claims that Mr. Krabs likes when the Krusty Krab is dirty, so SpongeBob covers it in trash and grime. When the customers begin to leave, Squidward tells SpongeBob that he has to entertain them, so he starts dancing for them, frightening them.

Mr. Krabs returns from his manicure and is shocked to find the Krusty Krab a mess. When he asks SpongeBob what happened, SpongeBob explains he was following everything Squidward said and he told him all his "secrets". Mr. Krabs, believing he told someone about his manicure, while still in charge, SpongeBob appoints Mr. Krabs to clean the dishes. The episode ends as Mr. Krabs again splits his fingernail, as Incidental 105 is still behind the grill, Squidward is sleeping, and SpongeBob is dancing for the customers. 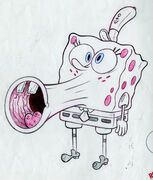