"Stuck in the Wringer"

"Stuck in the Wringer"
"Growth Spout" is a SpongeBob SquarePants episode from season 7. In this episode, Pearl goes through her growth spout, and Mr. Krabs is forced to raid peoples' pantries to feed her.

In the beginning of the episode, Mr. Krabs is about to brush his teeth when suddenly, a "gray cork" is pushed in his bathroom wall and the toothpaste cap falls off of the sink. Pearl calls for help, and when Mr. Krabs goes upstairs, he sees her growing rapidly. Pearl needs food because she is, as it seems, going through a growth spurt. He finds the fridge, brings it upstairs, and Pearl eats the entire fridge, but it is not enough.

After Pearl threatens to eat Mr. Krabs' money, Mr. Krabs sneaks into Mrs. Puff's vegetable garden and steals all of her peanut worms, thinking they are peanuts, to feed to Pearl, but realizes they are not peanuts when they start spitting up on him. Mr. Krabs tries to escape, but Mrs. Puff hits the fence piece Mr. Krabs is on with a crowbar, sending Mr. Krabs flying away from her. He then looks in Patrick's house for food and finds nothing but inedible food made out of sand. Mr. Krabs finds Patrick sleeping in his cereal bowl and steals it. After feeding it to Pearl, she still wants more food.

Mr. Krabs then goes into Squidward's house, steals all of his food, and feeds it to Pearl, but she still yells for more. He goes to SpongeBob's house and is about to get some food until SpongeBob notices. Squidward then comes in and angrily explains that Mr. Krabs is a food thief. He is about to call the police and ignores threats of firing him, Mr. Krabs pleas that he will give something. Squidward sarcastically asks if Mr. Krabs will give him his gold tooth, something the latter does after removing. SpongeBob remarks that he had no idea that Mr. Krabs had such a thing and Squidward states he did not either, but takes it anyway and leaves.

Mr. Krabs cries and SpongeBob tells him that his tooth will heal. Mr. Krabs is not worried about that since those nerves died years ago. He tells SpongeBob that he needs to feed his daughter. SpongeBob asks why he does not take her to the Krusty Krab, as the latter says that will deplete his inventory. SpongeBob laughs and says he will make one Krabby Patty that tastes like a million.

They bring Pearl to the restaurant where SpongeBob feeds Pearl, who not only stops feeling hungry, but stops growing too and is back to normal. Mr. Krabs asks SpongeBob what ingredient he used to make the patty stop Pearl's problem and the fry cook tells Mr. Krabs that love was the secret ingredient. Mr. Krabs laughs and then stops, soon realizing that SpongeBob was right, as the episode ends. 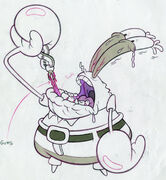 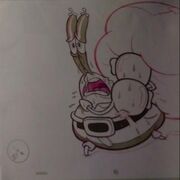