"The Cent of Money"

"The Cent of Money"
"Gramma's Secret Recipe" is a SpongeBob SquarePants episode from Season 7. In this episode, Plankton pretends to be SpongeBob's great-grandmother in an attempt to get the Krabby Patty Secret Formula.

In the beginning at Shady Shoals Rest Home, Plankton is with his grandmother, who is lying down on a bed. After thinking of what to do with her, Plankton puts his grandmother to sleep, and then takes some of her clothes to wear. 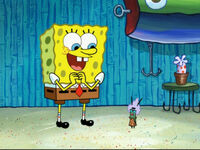 Plankton later walks over to SpongeBob's house, where he appears. Plankton says that he is his great grandmother, in which he actually believes so. SpongeBob gives his "great grandmother" a tour of his house and shows Plankton all of his albums. The next day, Plankton wants to go to the Krusty Krab, but SpongeBob insists that they go to a nursing home instead. There, they knit and play cards, when Plankton rips a card in annoyance at SpongeBob's antics.

SpongeBob realizes he is bored and decides to take him to the Krusty Krab, although Plankton says he wants to enter through the back door.

Meanwhile, Plankton ties up a balloon that looks like him. It flies away into the dishwasher, and when SpongeBob turns it on, the balloon pops. SpongeBob, thinking it is his great grandma, cries, but then Plankton re-appears and says he is fine. After, Plankton tells SpongeBob that he is tired and needs to take a nap in a private place. SpongeBob agrees and takes him to the safe. Thereafter, Plankton's grandma walks inside of the Krusty Krab and finds out what Plankton is secretly plotting. She takes him back while SpongeBob thinks that his own great grandma caught Plankton trying to steal the formula.