"Le Big Switch"
"Goo Goo Gas" is a SpongeBob SquarePants episode from season 5. In this episode, Plankton creates a gas that turns adults into babies.

In the beginning of the episode, Plankton is disguised as a pepper shaker, taking a Krabby Patty, but he is easily caught by Mr. Krabs. As he is lamenting his failure on a bench in the park, Plankton then hears a woman saying that she can take her baby's milk away from him and he cannot do a thing about it. This makes Plankton realize he will turn Mr. Krabs into a baby.

Plankton then leads Mr. Krabs in a telephone booth by money where he sprays Goo Goo Gas on him, turning Mr. Krabs into a baby, but Baby Krabs teethes on Plankton. SpongeBob finds Baby Krabs and takes him, but Plankton accidentally reveals to an overhearing SpongeBob that Baby Krabs is Mr. Krabs and his plans. SpongeBob literally calls the cops and Plankton gets arrested, but easily escapes. SpongeBob explains everything to an arriving Squidward, who immediately leaves. SpongeBob takes the baby in the Krusty Krab and tries to comfort him with many items, eventually succeeding with a stack of twenties.

Soon, SpongeBob appears out of nowhere and says a speech about caring for senior citizens. However, Plankton sprays him as well, and then says that they cannot catch him. Both SpongeBob and Mr. Krabs then trap Plankton by knitting a net, getting hit one by one by senior citizens.

Plankton then realizes that there is one ingredient that he is missing to turn people into babies. He goes to Barg'N-Mart, where he buys baby powder, and then goes back to complete the experiment. Using Karen as a test subject, it works. He then returns to the Krusty Krab and sprays all the customers, including SpongeBob, Patrick, Squidward, and Mr. Krabs, and they remain stuck as babies for the rest of the episode. Plankton is about to get the formula when he gets beaten up by Baby Mr. Krabs who repeatedly slams the bottle on Plankton. He comes back out from under the bottle, and realizes he's got the formula, to which he compares to taking candy from babies, he goes and mocks Mr. Krabs because of the irony and then he realizes Baby SpongeBob got ahold of his gas canister. He yells "Hey, what are you doing?!"

Baby SpongeBob is seen laughing while bashing the canister on the ground. It flies into the air after a crack is put into the canister, the canister explodes, and releases gas everywhere, the gas reaches Plankton, which turns him into a microscopic baby, the scene cuts to Plankton, who is the size of an amoeba, realizing unlike the other babies the gas affected, he doesn't have a diaper. He yells "Ahem! Mama's evil little genius needs a diaper!" while covering his legs, to which the episode ends.

Originally, in the scene where Plankton sits on the bench and watches the baby, Plankton would take a baby bottle a few times and then kidnap the baby. The baby's mother would then walk up to the stroller and ask where her baby went. It was heavily implied in the audio commentary that Incidental 49 was not going to be the baby's mother, so it was later cut.[5] 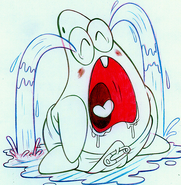