Scare up the laughs with this collection featuring the double-episode, Ghoul Fools, where SpongeBob and Patrick are caught in the middle of a ghostly feud, then meet the fancy knottin' champ of the last 3000 years, go on a treasure hunt and more!

You’re in for thirills and chills and really funny stuff with this SpongeBob SquarePants lineup featuring the sea’s least-scary scary ghost, the Flying Dutchman himself! Aye, this here set has the spooky special double-episode, Ghoul Fools, where SpongeBob and Patrick find themselves in the middle of a ridiculous feud between a crew of ghost pirates and the Flying Dutchman. Then the boys make the mistake of disturbin’ the Flying Dutchman’s sleep, so he turns them into ghosts … SpongeBob gets a lesson in tying knots from the first-place winner in the fancy knottin' contest for the last 3000 years … Mr. Krabs trades SpongeBob for the money in the Flying Dutchman’s pocket, all 62¢ of it … the boys are off to, argh, find buried, argh, treasure with, argh, Mr. Krabs and his, argh, familiar-looking treasure map … the Flying Dutchman overstays his welcome at SpongeBob’s house, rendering all his scares a total bore, so it’s up to SpongeBob to help Dutchie get his ghostly gift back … and Mr. Krabs learns the scariest, most awful thing he could ever imagine – his money wants to be spent! You’re in for hours of ghostly good tales from SpongeBob SquarePants! 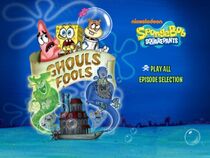 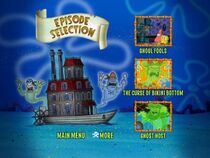 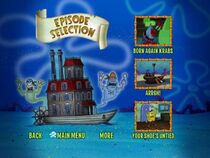 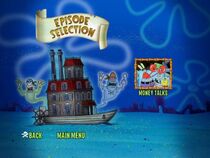