"The Nitwitting"
"Gary & Spot" is a SpongeBob SquarePants episode from season 12. In this episode, Sandy narrates the nocturnal adventures of Gary and his secret pal - Spot.

Sandy starts the episode with Gary waking up at the middle of the night and going outside SpongeBob's house. He eats some trash, but Patrick is also eating there and does not want to share. He roars at the starfish, causing him to get scared and run away.

The animal control appears and spots Gary, but he runs away before he can catch him. He goes to the Chum Bucket and goes inside through a secret entrance, where he meets up with Spot, his best friend.

The two go out of the restaurant and play with each other, but eventually get hungry and go to the Krusty Krab. While they are eating, Marvin, the animal control officer, arrives there and attempts to catch the two, but he fails and they escape. Mr. Krabs arrives and gets angry with the officer for tripping his silent alarm and thinks he made a mess of his restaurant.

Gary and Spot run away and hide at a sunken ship, but it turns out it had already been occupied. Thankfully, they were already friends with everyone in there, and they have a party. Marvin reaches them and starts dancing to the music, until it gets turned off due to the DJ getting shocked by the officer's presence.

He takes all the animals except Gary and Spot, so the two go to the Animal Shelter to rescue them. After getting in and releasing all the animals, Gary finds out that Marvin is sad, as he is lonely. He tells the others this, and they all set up a dinner with a woman made out of slime. He falls in love with her at first sight, and marries her soon after. He releases all the animals to thank them for bringing love into his life. Gary and Spot go back to their homes, and Sandy concludes the episode and tale. 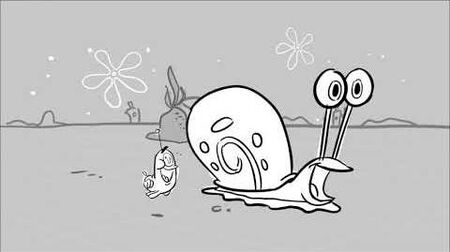