"Gary's Got Legs" is a SpongeBob SquarePants episode from season twelve. In this episode, Gary is given a set of limbs to keep up with SpongeBob, but soon makes his owner look sluggish by comparison.

The episode starts with SpongeBob trying to take Gary for a walk. However, Gary is too slow to catch up with him, due to being a snail, so SpongeBob tries to help Gary become faster. He first makes Gary some tank treads to use, but they malfunction and run SpongeBob over. Back at his house, SpongeBob decides to give Gary some legs in order to make him faster, so he removes a pair of his legs and gives them to Gary. Gary, due to his lack of experience, stumbles about with his new legs, but SpongeBob helps teach him how to use them properly.

The two then decide to show off Gary's legs at the Snail Park. When they arrive, the pet owners are shocked at a snail with legs, and are fascinated by Gary. Gary then gets into a fight with a worm, and kicks it away. The worm's owner yells at Gary, but Gary just kicks him away as well. Gary then goes on a rampage, kicking everyone and their pets out of the park. SpongeBob tries to scold Gary for his behavior, but Gary licks him, causing the sponge to forgive his pet.

When the two go back home, SpongeBob realizes that Gary is unable to open the front door by himself, and decides to give Gary a pair of his arms. After SpongeBob trains Gary to use his arms, Gary decides to uses his new limbs to take care of SpongeBob, moving him around the house and feeding him so that SpongeBob doesn't have to move at all.

The weekend soon ends and SpongeBob realizes that he has to go to work. However, his arms and legs have become atrophied from lack of use, causing Gary to take over for him. At the Krusty Krab, some of the customers complain to Mr. Krabs about snail slime in the food, and he discovers that Gary has taken over for SpongeBob. Angered at his business being potentially ruined, he goes to SpongeBob's house to talk to him.

When he arrives at SpongeBob's house, he discovers that, much to his horror, SpongeBob is now acting as a snail, essentially meaning that SpongeBob and Gary have swapped lives as owner and master. Gary soon comes home from work, and Krabs decides that enough is enough. He breaks into SpongeBob's house and slaps some sense into him, returning the sponge to normal. However, Gary refuses to go back to his normal pet life, and fights Mr. Krabs. Krabs simply cuts Gary's limbs off, reducing him back to a normal snail. Mr. Krabs then takes SpongeBob to work, while Gary is fine being a pet again.

That night, SpongeBob and Gary go to bed, but decide to sleep in each other's beds as a spare pair of arms turns the lights off, ending the episode. 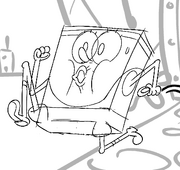 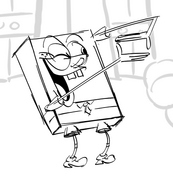 Retrieved from "https://spongebob.fandom.com/wiki/Gary%27s_Got_Legs?oldid=2667305"
Community content is available under CC-BY-SA unless otherwise noted.