watch 01:38
SpongeBob Recap: Fun-Sized Friends
Do you like this video?

"Grandmum's the Word"
"Fun-Sized Friends" is a SpongeBob SquarePants episode from Season 11. In this episode, SpongeBob and Patrick exchange tiny living versions of themselves.

The episode starts with SpongeBob and Patrick messing around outside noisily. Squidward then comes out and yells at them, asking what they're doing. They say that they're enjoying their time together, but Squidward claims that that playtime is over and that they need to "cut it out."

At home, SpongeBob says it's time for bed, to which Tiny Patrick is happy about, jumping all over SpongeBob. SpongeBob and Tiny Patrick begin cleaning up and getting ready for bed. Meanwhile, at Patrick's house, Tiny SpongeBob falls into the sink after being disgusted by Patrick's bad breath and horrid teeth.

SpongeBob puts his teddy bear's pajamas on Tiny Patrick and the two go to bed, the same is happening at Patrick's house.

SpongeBob ties Patrick to himself and puts him in his back pocket. Tiny Patrick tries to escape but ends up hanging beside SpongeBob.

At Patrick's house, it is now noon and he and Tiny SpongeBob wake up. Patrick makes himself a sandwich made out of all his food, not letting Tiny SpongeBob have anything to eat.

After dark, SpongeBob and Patrick leave while Tiny SpongeBob and Patrick realize something is missing and they go to get it. The next day, they have build a mini version of Squidward's house, but it's Squidward who they have kidnapped and proceed to annoy with their antics. A frustrated Squidward screams at the reflection of his actual neighbors, especially when he gets hit and the tiny pair hug him as an apology, much to his annoyance, as the episode ends. 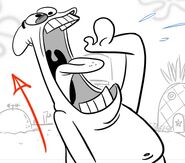 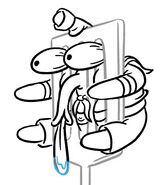 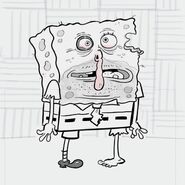 Retrieved from "https://spongebob.fandom.com/wiki/Fun-Sized_Friends?oldid=3459085"
Community content is available under CC-BY-SA unless otherwise noted.