"Neptune's Spatula"
"Fools in April" is a SpongeBob SquarePants episode from season 1. In this episode, Squidward is fed up over SpongeBob's amusement to April Fools' Day, and decides to play a nasty prank on him.

The episode begins with SpongeBob waking up and realizing that it is April Fool's Day. Squidward sees him and wonders what SpongeBob is so pleased about, until he looks at the calendar, and realizes that it is April Fool's Day, which he says is SpongeBob's favorite holiday. Fearing the worst has to come, Squidward calls Mr. Krabs saying he caught something terrible and that he would not be able to make it to work. Mr. Krabs says that there is an art collector in his office who wants to buy Squidward's art and name him the artist of the month. So, Squidward immediately rushes to the Krusty Krab, only to find that it was a silly prank by SpongeBob and Mr. Krabs. Squidward attempts to resign from his job, but SpongeBob persuades him to stay, promising not to pull any further pranks on him.

However, SpongeBob continues to prank the customers inside the Krusty Krab while not pranking Squidward but getting carried away with it. The customers do not take offense to SpongeBob's pranks as they are harmless and playful in nature and they even laugh with SpongeBob. Although Squidward is not receiving any more tricks as SpongeBob promised, he gets furious over his and the customers' laughter. Eventually, an angry Squidward decides to get revenge on SpongeBob by showing him what he feels is a "real" prank.

Squidward sets an elaborate rope trap attached to an anchor suspended from the ceiling and squirts a blob of mustard in the middle of the lasso. As SpongeBob goes to clean it up, Squidward cuts the rope holding the heavy anchor, causing SpongeBob to get his foot caught in the rope, triggering a chain reaction that sends him flying around the restaurant, colliding into several objects and areas, ending with him into landing in a garbage can. Squidward laughs hysterically at him, but a hurt SpongeBob runs out of the restaurant crying. Bewildered by SpongeBob's reaction, Squidward calls out to him, saying that he was just kidding, and turns to the customers for support. But the customers are appalled by Squidward's prank, seeing it as far too harsh and nasty to be funny. They all feel sorry for SpongeBob and call Squidward out on this as they storm out of the restaurant in disgust. Distressed at their reaction, Squidward frantically insists that it was only a joke, but as he looks around at the damage his prank did to the restaurant, it slowly dawns on him that SpongeBob's pranks were actually funny, harmless, and meant to make people laugh so that SpongeBob could laugh with them, while his prank was just cruel, and meant to hurt and humiliate SpongeBob so he could laugh at him, all because he was not able to deal with it. Overcome with immense guilt, Squidward realizes that he has no choice but to apologize to SpongeBob.

Squidward goes to SpongeBob's house and sees SpongeBob's hat behind a rock. He goes over to apologize but then sees that it is just Patrick wearing the hat while digging. Squidward asks why he is wearing the hat and where SpongeBob is, and Patrick tells Squidward that SpongeBob is in the house "impressed" (instead of depressed) and was crying a lot. This, of course, makes Squidward feel even more guilty and he rushes over to SpongeBob's house and bangs on the door. He goes so far as to force his way in, but SpongeBob slides his arm through the door and removes the doorknob, clearly in no mood to talk to him. Losing patience, Squidward gets his clarinet and starts playing badly, refusing to stop until SpongeBob reluctantly answers him. Squidward attempts to apologize, but since apologizing to others is not something Squidward normally does, and because of his intense hatred toward SpongeBob, he initially finds himself to be physically incapable of doing so.

Squidward tries other methods of apologizing to SpongeBob, including sending him an apology note in a bottle but shoving the cork all the way in the bottle and apologizing to SpongeBob far away via two cans attached to a string, but these are foiled by SpongeBob not having a bottle opener and Patrick using the string as floss, respectively. Eventually, he is able to apologize by putting a bubble over his head, so that SpongeBob does not actually hear his apology. Squidward walks away, saying that his conscience is clear, but is confronted by memories of what he did. After he imagines his mother telling him he stinks, he runs back and genuinely apologizes to SpongeBob, even admitting he likes him, his friends, and everyone else in Bikini Bottom, but tells SpongeBob not to tell anyone. SpongeBob promises not to tell and forgives him, but then fully opens his front door, revealing that everyone else is inside behind him, and witnessed Squidward's apology. They all say "April Fools!" to Squidward, who is flabbergasted by this. Squidward states that he was fooling them as well before running away to his house, while laughing maniacally, causing SpongeBob to ask, "What would we do without Squidward?", ending the episode. 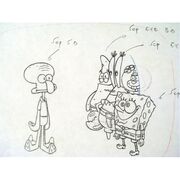 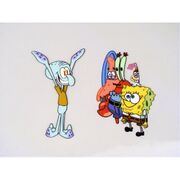 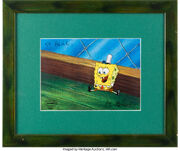 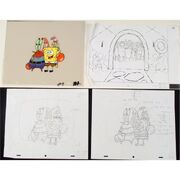