The Flying Dutchman's mom is a green ghost who wears a green shirt with a light green skull on it, a black vest, green arm rings, glasses, and a bandana with dark purple dots.

According to the Flying Dutchman, whenever his mom visits him, she cleans everything, including his ship and the Flying Dutchman himself, but before the latter's mom goes on a cleaning spree, she needs to lecture him which just goes on persistently.

SpongeBob once made the Flying Dutchman clean his ship and then himself so his mom would not have to lecture him when she visited. 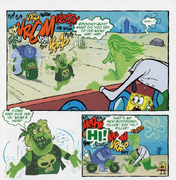 Add a photo to this gallery
Retrieved from "https://spongebob.fandom.com/wiki/Flying_Dutchman%27s_mom?oldid=2208537"
Community content is available under CC-BY-SA unless otherwise noted.